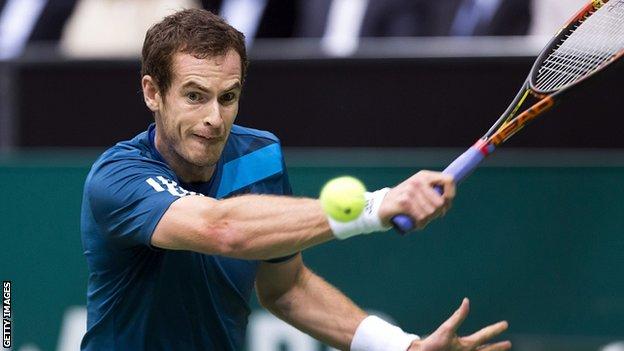 British number one Andy Murray eased past Edouard Roger-Vasselin 6-3 6-3 to reach the second round of the ABN Amro World Tennis Tournament in Rotterdam.

Murray, who has slipped to number six in the world rankings following back surgery, reached the Australian Open quarter-finals in January.

He accepted a late wildcard to play in Rotterdam after helping Great Britain beat United States in the Davis Cup.

In round two the Scot will face 20-year-old Austrian qualifier Dominic Thiem, who beat Finland's Jarkko Nieminen 6-4 4-6 6-4, not before 18:30 GMT on Wednesday.

"I moved well. For me that's a big part of my game," Murray told the ATP.

"Sometimes at the beginning of weeks it can be tough to get used to a new surface in terms of your movement, but from the beginning of the match, I made it tough for him to hit any winners and kept making him play one extra ball.

"Hopefully as the week goes on I'll start to hit the ball better with each match."

Wimbledon champion Murray is looking to repeat his 2009 success on the indoor hard surface in Rotterdam, when he beat Rafael Nadal in the final.

Against the world number 35 Roger-Vasselin, Murray broke in the third game and clinched the set with back-to-back winners.

A break in the second game of the second set put Murray in control, but he had to save break points in the fifth and seventh games to stay ahead.

The Scot sealed his progress when Roger-Vasselin chipped a backhand inches long.

Elsewhere, defending champion Juan Martin Del Potro of Argentina, returning after treatment to his left wrist, beat France's Gael Monfils of France 7-6 6-3 to advance to the second round.

"My left wrist is getting better," said Del Potro. "It's improving day by day. I think I played 50% slices. For the next match I will try to play my regular backhand more.

"I don't feel pain at the moment, which is good. I will do my treatment now and hopefully be better for tomorrow."