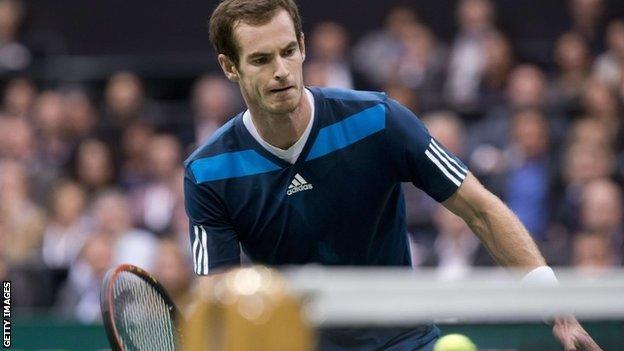 Murray, seeded second in Rotterdam, was broken in his first service game and again in the fifth game of the second set as he lost 6-3 6-4 in 71 minutes.

The world number six said: "It was the first time I've played three [days] in a row since the surgery in September, so that has to be a positive."

Highest career ranking is ninth, and he has earned around £4m

Won 10 career titles so far. Best Grand Slam performance was reaching the semi-final in Australia in 2010

Cilic, who sent down eight aces, will play Igor Sijsling in the last four.

Murray, who had back surgery in September but reached the quarter-finals of the Australian Open last month, failed to convert any of three break points from 40-0 in game six of the second set as Croatia's Cilic saw out a comfortable win.

The Scot added: "I didn't get off to a good start in the first set, but he served extremely well throughout the match. I created a lot of opportunities to break serve, but I could not convert my chances."

It was Cilic's second win over Murray in 11 FedEx ATP meetings.

"Andy made a few more unforced errors than usual, but I think it is a great victory for me. Eight wins in a row now and I am looking forward to the semi-finals."

Cilic, who last beat Murray at the 2009 US Open, has now won 16 straight sets on the ATP World Tour. Last week, he lifted his fourth PBZ Zagreb Indoors title when he beat Tommy Haas in the final.