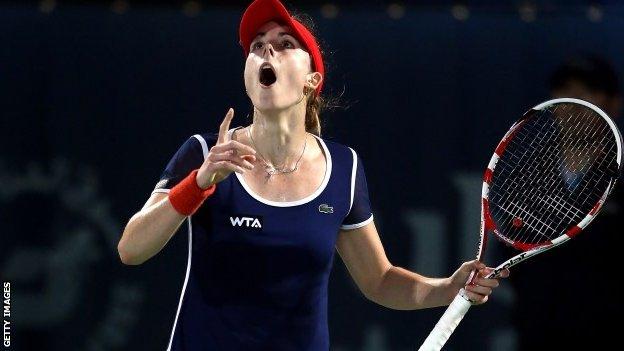 World number one Serena Williams admitted to being "embarrassed" after losing 6-4 6-4 to Alize Cornet in the semi-finals of the Dubai Championships.

"I don't think I have made that many errors in a match in three, maybe four years. Out of 10, I was like a minus 283. Maybe I can go to the amateurs."

Cornet, who will play Serena's older sister Venus in the final after the 33-year-old beat Caroline Wozniacki 6-3 6-2, described the win as "the biggest" of her career.

Hopes of a first all-Williams tour final since 2009 were ended by the Frenchwoman, who was happy to trade shots from the baseline.

"She's maybe the biggest champion of history, and, wow, just thinking I beat her," said the 24-year-old.

"I had to forget about Serena on the other side of the net and concentrate on my own game. I tried to play very deep and stay focused."

The first eight games went with serve before Williams, who lost just four matches in 2013, hit a forehand long to gift her opponent a break.

Cornet then held her nerve and serve, hitting a backhand winner to take the opening set.

An early break in the second set helped her open a 2-0 lead and, although Williams won the next three games, Cornet regained her composure and broke again to go 4-3 ahead.

Serving at 5-3 down, Williams saved four match points as she forced Cornet to serve out for the win, which she did by holding to love.