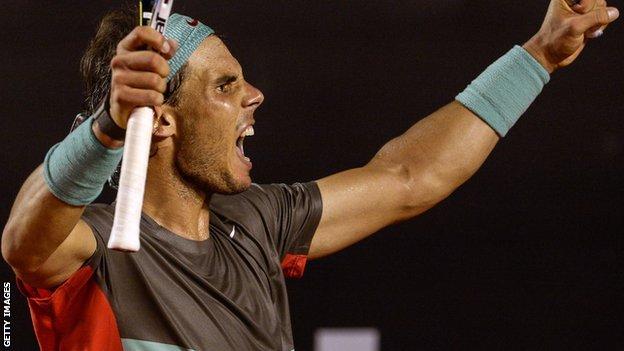 Rafael Nadal beat Ukrainian Alexandr Dolgopolov 6-3 7-6 (7-3) in the Rio Open final on his return from injury.

The world number one's victory comes four weeks after he lost the Australian Open final to Stanislas Wawrinka having tweaked his back while warming up.

The Spaniard, who survived two match points in the semi-final against Pablo Andujar, never looked under threat.

It was Nadal's 43rd clay title and stretches his record on the surface to 298-21, the best of the Open era.

Dolgopolov hit several exquisite winners, especially from the backhand wing, but struggled to find a consistent enough game to trouble Nadal, who made only a handful of unforced errors in the whole match.

The world number 57, who upset David Ferrer in the semi-final, rallied in the second set to break Nadal's serve for the only time when the 13-time Grand Slam winner was serving for the match.

But Nadal, 27, took the title with a dominant tie-break.

The 2013 French Open champion has not lost on clay since his defeat by Novak Djokovic in the Monte Carlo Masters 10 months ago.