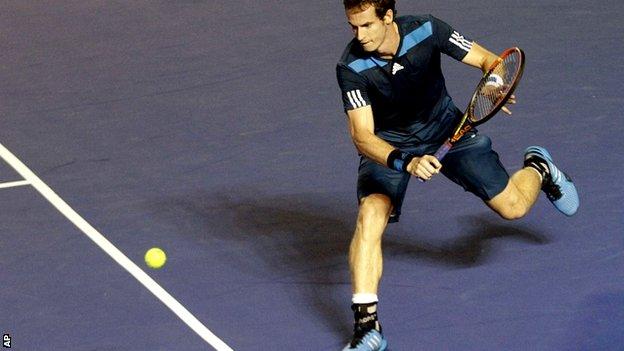 Britain's Andy Murray came from a set down to beat Spain's Pablo Andujar 3-6 6-1 6-2 in the first round of the Mexican Open in Acapulco.

Andujar, ranked 34 in the world, won the first five games on his way to taking the first set and and broke Murray at the start of the second.

However, Murray responded by winning six games in a row and will face Portugal's Joao Sousa in the last 16.

"I had a difficult start," said the world number seven.

"It was 10 minutes in the match and I was down 5-0, but I started to play more aggressively to get the win and hopefully I can have a good week here.

"The first set was extremely challenging. He was dictating the points, but later on he was getting tired and I put pressure on him."

Murray is playing in Latin America for the first time in his career and is hopeful Acapulco's switch from clay to hard courts will give him the chance to boost his ranking.

He next faces world number 44 Sousa, whom he beat in straight sets at the Australian Open last year.

Murray said: "He was new on the tour then and he has improved. He's playing good tennis. He's good on clay and on hard courts.

"He plays similar to Pablo. Hopefully I can play aggressively from the start."

David Ferrer is the top seed and three-time champion in Acapulco, and the Spaniard opened with a 6-2 6-3 win over Mikhail Kukushkin of Kazakhstan.

Ward was given a wildcard into the tournament and the former Queen's Club semi-finalist secured his first ATP win outside the UK.