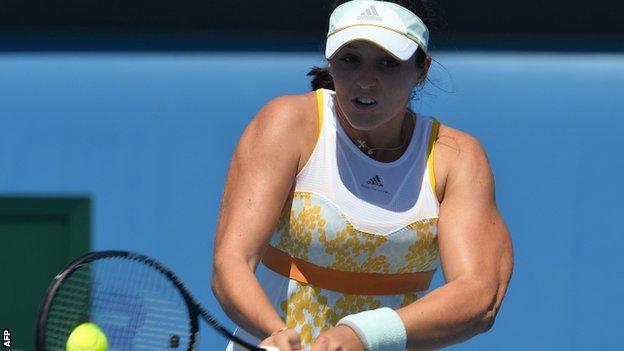 British number one Laura Robson has ruled herself out of the BNP Paribas Open in Indian Wells in March as she recovers from a wrist injury.

Robson, 20, has only completed one full match this year, at the Australian Open, and revealed on her Facebook site she would not play in California.

She said: "I'm happy to report that I continue to progress with my wrist.

"But I'm still not ready to compete at the highest levels so I won't be playing in Indian Wells."

Robson was beaten 6-3 6-0 by Belgian 18th seed Kirsten Flipkens in the first round of the Australian Open in January.

In December, she pulled out of the ASB Classic in New Zealand because of a problem to her left wrist and week later quit the Hobart International with the same problem while leading her first-round match against Belgium's Yanina Wickmayer.

That was her first competitive outing since teaming up with American coach Nick Saviano in November.

Melbourne-born left-hander Robson, who reached the last 16 at Wimbledon in 2013, has had wrist problems before. An injury to her right wrist forced the world number 56 to miss the Rogers Cup last August.

The main draw of the women's competition at Indian Wells gets under way on 5 March.