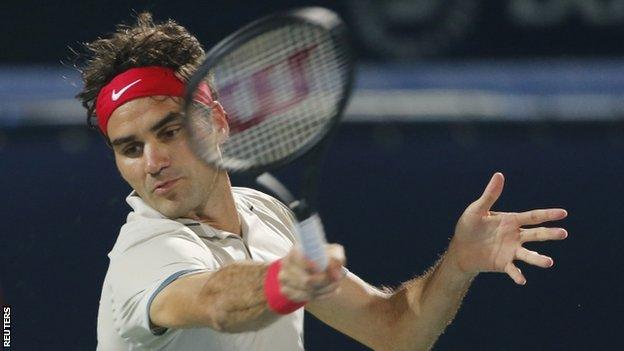 Fourth seed Federer beat Rosol of the Czech Republic 6-2 6-2 and will face Djokovic on Friday.

The Serb advanced to the last four after Russia's Mikhail Youzhny withdrew through illness.

Federer recovered from an early deficit against the sixth seed to win 12 of the final 14 games, completing victory in only 58 minutes.

Federer lost his opening service game for the fourth successive set to fall 2-0 behind, but he broke back to love and won six games in a row to take the set.

Federer saved a break point to avoid losing his first service game in the second set, but then broke Rosol twice more to complete a routine success.

Returning to the tour more than five weeks since the loss of his Australian Open title, Djokovic goes into the meeting with Switzerland's Federer with a little more than two hours court time from his two matches in Dubai.

Earlier on Thursday, Germany's Kohlschreiber beat Tunisia's Malek Jaziri 6-2 6-3 for his 300th win of his career, and Berdych, of the Czech Republic, beat France's Jo-Wilfried Tsonga 6-4 6-3.

Kohlschreiber said: "It's always great to win many matches on the tour, especially a few rounds in a row. I think I produced a very solid and good performance today. It's great that I have 300 victories under my belt."