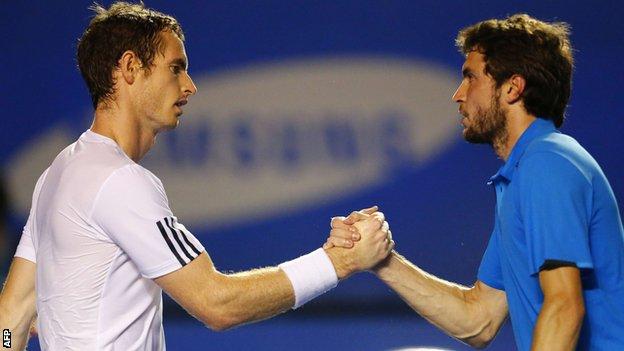 The British number one started slowly and the Frenchman was serving for the match at 5-3 in the second set.

But the Wimbledon champion, 26, recovered to force a tie-break before commanding the third and decisive set.

Murray had similarly struggled at the start of his two previous matches in the Acapulco tournament.

And just as he had with Joao Sousa and Pablo Andujar earlier in the week, the Scot grew in confidence and began to take hold of the match the longer it went on.

However, Murray may have been aided by an injury to Simon, as his opponent called for a medical timeout after one game of the third set and was promptly broken to go 2-0 down.

Murray will take on Bulgarian Grigor Dimitrov in the semi-finals after the fourth seed beat Ernests Gulbis 4-6 7-6 (7/2) 7-5.

In the other quarter-finals, top seed David Ferrer of Spain retired in the second set of his match against South Africa's Kevin Anderson with a leg strain, while Ukraine's Alexander Dolgopolov beat Croatian Ivo Karlovic 6-4 7-6.