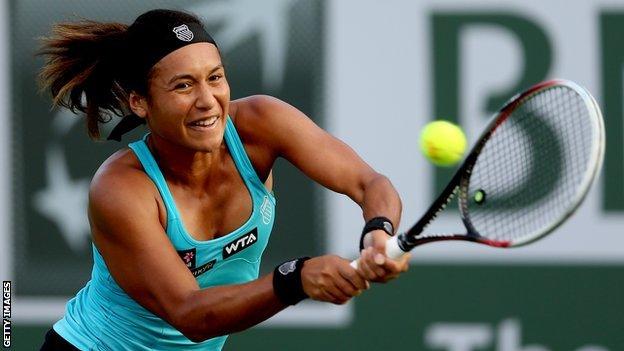 Heather Watson reached the second round of the BNP Paribas Open in Indian Wells with a 7-5 6-4 victory over Swiss Belinda Bencic.

The British number three will now face Poland's Agnieszka Radwanska, who beat her at Wimbledon in 2012.

The 21-year-old said: "This will be a different atmosphere, but I'm really looking forward to playing her again."

Britain's James Ward, 27, was beaten 6-2 6-3 by Frenchman Paul-Henri Mathieu in the final round of men's qualifying.

Watson, who is ranked 134th in the world after a disappointing 2013, added: "I'm so pleased with the way I'm playing at the moment."

Referring to her meeting with world number three Radwanska, who has beaten her comfortably in both their previous meetings, she said: "I'm not going to give away my tactics, but I'm not going to go in playing the same way I did the other two times."

British number three Ward won his first match at the tournament on Tuesday and had plenty of chances against Mathieu, who reached a high of 12th in the world rankings in 2008.

He had six break points and was ahead in numerous Mathieu service games, but could not take advantage.

British number one Andy Murray, who has a bye in the first round, will play either Rafael Nadal's 2012 Wimbledon conqueror Lukas Rosol or a qualifier in the opening match at the year's first Masters series event.