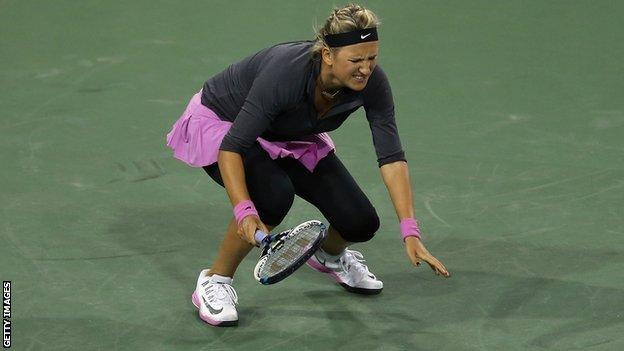 Third seed Victoria Azarenka limped out of the BNP Paribas Open with a 6-0 7-6 (7-2) defeat by America's Lauren Davis in the second round at Indian Wells.

The Belarusian, 24, was affected by a foot injury that has prevented her from competing since her loss to Agnieszka Radwanska in the Australian Open.

Azarenka struggled with her movement and seemed to be in considerable pain.

She said: "I wanted to give it my best shot. Obviously it was maybe a little bit too early."

The two-time Australian Open champion had been criticised in the past for retiring during matches.

It quickly became apparent against Davis, who had never previously beaten anyone remotely of Azarenka's calibre, that she was far from fully fit.

Azarenka suffered with her serve, double-faulting 12 times, and tumbled over in pain several times.

She added: "I'm pretty proud of whatever I did today. I think it's pretty good considering what I have been through.

"I want to learn how to go through the tough thing, how to try to do the best in the toughest situation. Sometimes it takes time. It's a process to go through."