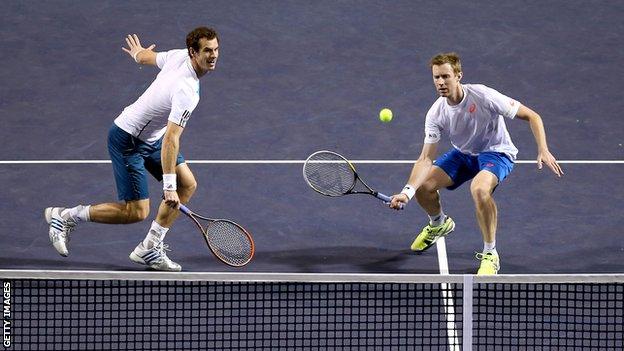 The encounter came alive in the match tie-break, when the Britons raced into a 6-3 lead but were pegged back to 8-8.

However they converted their second match point after a rally that left a scrambling Monfils on the floor.

Flamboyant Frenchman Monfils and Argentine Monaco had fought back after Murray and Marray, the latter of whom won the Wimbledon 2012 men's doubles title with Frederik Nielsen, claimed the first set.

The doubles format at Indian Wells sees a deciding champions' tie-break played instead of a full third set.

Liverpool-born Marray, ranked 43 in the world in doubles, needed to be partnered by a higher-ranked player in order to compete at Masters Series tournaments like Indian Wells.

That led to his new partnership with defending men's Wimbledon champion Murray, who begins his singles campaign on Saturday against Czech Lukas Rosol.

"I feel great," said Wawrinka. "I was home after the Davis Cup for three and a half weeks. I'm really happy. I think my level is really good and physically I'm ready."

Victory was significant for Inglot not least because Fognini and Seppi will carry Italy's hopes in the singles - and possibly doubles as well - when they meet Britain in next month's Davis Cup quarter-final in Naples.

Inglot partnered Colin Fleming in the doubles rubber when Britain beat the United States in the first round of the World Group last month.