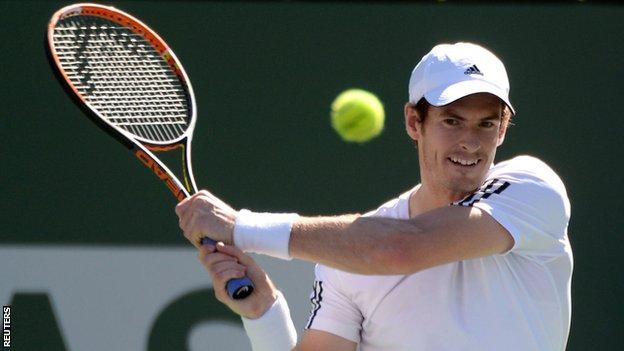 Andy Murray fought back from a set and a break down to beat Lukas Rosol 4-6 6-3 6-2 and move into the third round of the BNP Paribas Open at Indian Wells.

Czech Rosol, who beat world number one Rafael Nadal at Wimbledon in 2012, kept his nerve to win the opener and broke the Briton at the start of the second.

But Murray recovered to level the match and the world number six went on to break Rosol twice in the deciding set.

Murray aims to go one better

"I tried to play more aggressively in the second set," said Murray, 26.

"Lukas hits the ball extremely hard and if you allow him to dictate the game then it becomes very hard."

The Scot added: "I got broken three times in a row the end of the first set, beginning of the second.

"I just kind of kept going and found a way to win, which is always the most important thing."

Defending Wimbledon champion Murray will now face another Czech Republic player, Jiri Vesely, in the next round of the California event.

Murray is also in the men's doubles tournament and he and fellow Briton Jonny Marray will meet the pairing of Alexander Peya of Austria and Brazil's Bruno Soares on Sunday in the second round.

The competition, the first of nine ATP World Tour Masters 1000 events this season, features a strong line-up including nine of the top 10 in the world rankings.

Defending champion Rafael Nadal also lost the first set of his match against Radek Stepanek before earning a 2-6 6-4 7-5 win.

The Spaniard, who found himself 0-40 down in the sixth game of the decider before eventually prevailing, revealed the back injury that severely hampered him in the Australian Open final is still on his mind.

Nadal, who served eight double faults, said: "I was a little bit scared for the back. I am not feeling yet 100% confident with my serve.

"He is not the right player to play against in the first match because what you want to find is rhythm and against him every point is different."