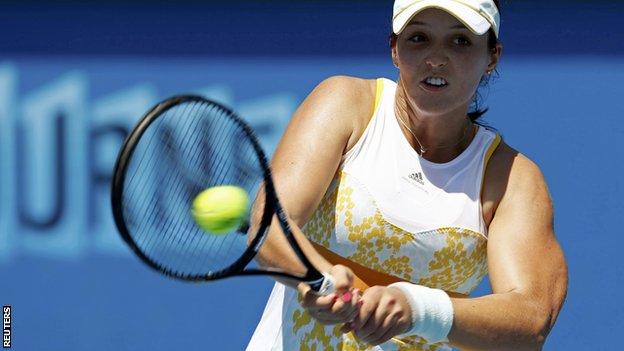 Laura Robson is preparing to return to competition after adding Colombian Mauricio Hadad to her coaching team.

He will work with 20-year-old Robson for 27 weeks of the year, but will not be available during Davis Cup weeks as he remains his country's captain.

Robson hopes to be back in action soon, but a wrist injury may keep her out of next week's Sony Open in Miami.

The British number one has completed just one match all year - a first-round loss to Kirsten Flipkens at the Australian Open - and does not want to risk aggravating the injury.

When fit, she will work closely with her new-look coaching team.

Nick Saviano remains a consultant, who she can call on for advice, but his primary relationship is with Eugenie Bouchard, who reached the semi-finals in Melbourne in January.

That left Jesse Witten to fill the role of assistant coach and hitting partner for the first two months of the year, but at just 31 and with aspirations of continuing his playing career, Robson was lacking an experienced hand to guide her at such a key stage of her development.

That is why Hadad, who also spent two years working with fellow Briton Heather Watson, has been added to Robson's team.

Patrick Mouratoglou, Luke Milligan, Zeljko Krajan and Miles Maclagan are the other coaches who have worked with the world number 54 in the past three years.

Those plotting Robson's future hope there is now a team in place which will stay together for a significant period of time.