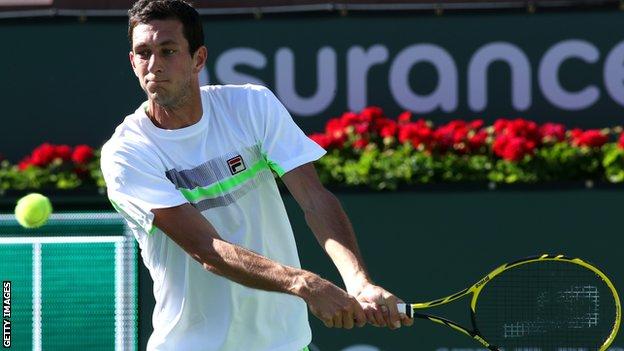 Ward was given a lucky loser spot in the tournament after Juan Martin Del Potro pulled out because of injury.

The 27-year-old broke Lopez once as he won the first set but the world number 37 bounced back to avoid an upset.

Meanwhile, British pair Andy Murray and Jonny Marray also lost as they went down 7-6 (7/1) 6-3 to Alexander Peya and Bruno Soares in the men's doubles.

Murray, 26, will now switch his attentions back to the singles as he plays Jiri Vesely in the third round on Monday.

Ward, ranked 160 in the world, showed promising signs that he might also make it into the last 32 before Lopez eventually proved too strong.

The Briton had 10 break points but could only convert one of them.

"Every time I had a break point he served an ace at 134mph. Too good," said Ward.

"It was another big match. I've played a lot of big matches in the last few weeks since Davis Cup and I've showed my level's been up there.

"I took a gamble on staying here rather than going to Dallas (for this week's Challenger tournament) and it paid off, and it nearly paid off even better."