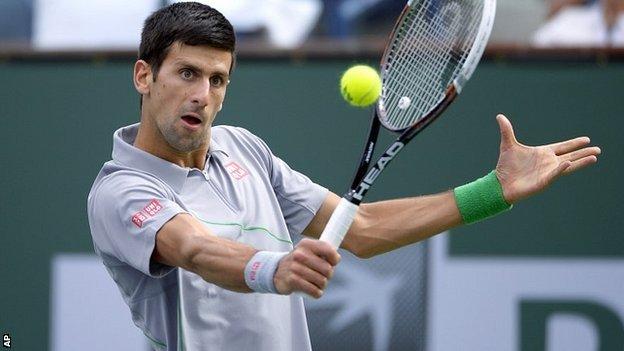 Novak Djokovic survived a second-set blip against Alejandro Gonzalez to reach the fourth round of the BNP Paribas Open at Indian Wells.

Djokovic was cruising towards victory before losing his serve to trail 5-3 in the second set. Gonzalez quickly levelled the match but the world number two broke in the second game of the third set and powered home.

In January, the six-time Grand Slam champion missed out on a fourth straight Australian Open title with a quarter-final loss to eventual champion Stanislas Wawrinka, and he fell to Roger Federer in the semi-finals in Dubai in his only other tournament this year.

Roberto Bautista Agut and Feliciano Lopez are also through.

Britain's Andy Murray plays his fourth round match against Canadian Milos Raonic on Wednesday at 18:00 GMT.

In the women's event in California, Serbia's Jelena Jankovic beat fellow former world number one Caroline Wozniacki of Denmark 6-3 6-1 to reach the quarter-finals.

Top seed Li Na will play Dominika Cibulkova in a rematch of the Australian Open final after beating Aleksandra Wozniak 6-1 6-4.

Romania's sixth seed Simona Halep also made it to the last eight with a 6-2 1-6 6-4 win against Eugenie Bouchard of Canada.

Halep's next match will be against the Australian qualifier Casey Dellacqua, who got a walkover after American Lauren Davis retired through illness.