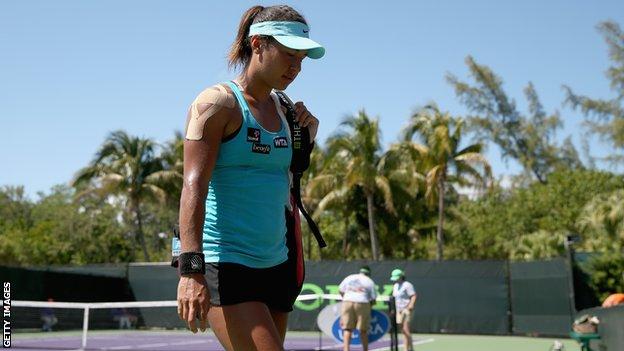 Heather Watson exited the Sony Open in the first round, losing to Virginie Razzano in straight sets.

Wild card Kyle Edmund, 19, also lost in the men's event but made Julien Benneteau, 32, fight all the way.

Edmund has only played twice on the ATP tour this season - losing both games - but played with power and maturity before two-time US Open doubles semi-finalist Benneteau gained the upper hand.

Watson took a 3-1 lead in the first set of her match but never looked comfortable and her French opponent took it in 43 minutes.

A series of double faults and poor shot selection from Watson helped Razzano close out the match.

Watson, 40 places lower than Razzano at 121 in the world, has been fighting her way back to form after time out with glandular fever last year.

She reached the second round in California last week before losing to second seed Agnieszka Radwanska.