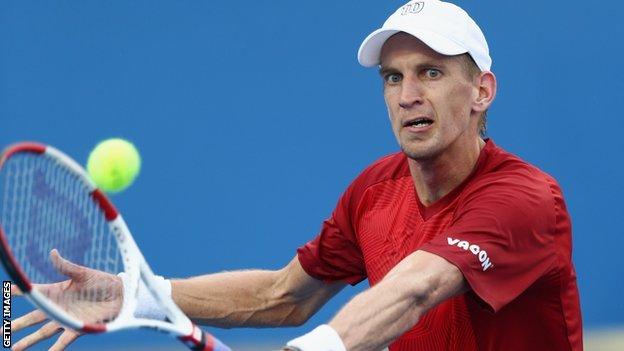 Nieminen, 32, took 28 minutes and 20 seconds to advance to the second round.

It means I have been around for an awfully long time

Briton Rusedski beat Germany's Carsten Arriens in 29 minutes at the Sydney International in 1996.

Andy Murray gets under way early on Saturday morning UK time, while in the women's draw Serena Williams and Maria Sharapova both reached the third round.

Briton Murray, seeking to defend his Miami title, will start his campaign some time after 01:30 GMT against Australia's world number 67 Matthew Ebden.

Tomic, the world number 74, had not played since retiring with a hip injury in the opening round of the Australian Open in January and the 21-year-old won just 13 points in the shortest match since the Tour began keeping official records in 1991.

"This was the first match back after the operation. It's all part of the rehabilitation process,'' said Tomic. "I'm not disappointed. I just have to keep working to improve my game.''

Lleyton Hewitt became the third man currently playing to win 600 matches when he fought back to beat Robin Haase of the Netherlands 3-6 6-3 6-3 in the first round.

He joined Roger Federer (942 wins) and Rafael Nadal (675) in reaching the milestone.

"Not many people get the opportunity to get close to that, so it means I have been around for an awfully long time," said the 33-year-old Australian.

Williams survived three set points in the opener against Yaroslava Shvedova, 26, on her way to victory in the second round of the women's draw.

The American world number one was given a stiff test by the 59th-ranked Kazakh, who led 5-3 in the first set and had three set points in the tie-break.

Fourth-seed Sharapova, who lost in last year's final to Williams, had no trouble getting past Japan's Kurumi Nara, the 26-year-old Russian breaking serve five times to Nara's two in a 6-3 6-4 win.