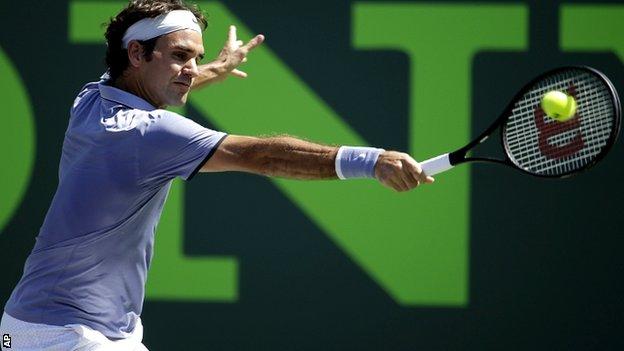 Roger Federer dropped just three points on serve in his opening match in Miami as he joined second seed Novak Djokovic in round three of the Sony Open.

There are no long rallies. It's more like a penalty shootout in soccer

Djokovic, 26, followed last week's win over Federer in Indian Wells with a 6-4 6-3 victory against Jeremy Chardy.

In the men's event, Federer is looking to regain the title he won in 2005 and 2006 after missing last year's tournament with a back injury.

"I was able to play a very clean match on my service games throughout, make sure I had a lot of first serves in, make sure I stayed aggressive from the baseline," said Federer after seeing off the 6ft 11in Karlovic.

"I think it worked really well, hardly any unforced errors. There are no long rallies. It's more like a penalty shootout in soccer.

"It's about quick reaction, not getting frustrated and feeling that the returner is the one who has got less pressure."

Djokovic was held up before serving for the match when Chardy hobbled to a courtside entry tunnel with an ankle problem and took a medical timeout.

"He twisted his ankle," said Djokovic. "I talked with him after the match. He says it's not as bad as he thought, but I wish him [a quick] recovery."

Fourth seed David Ferrer, ninth seed Richard Gasquet and 15th seed Grigor Dimitrov also made it through to the third round.