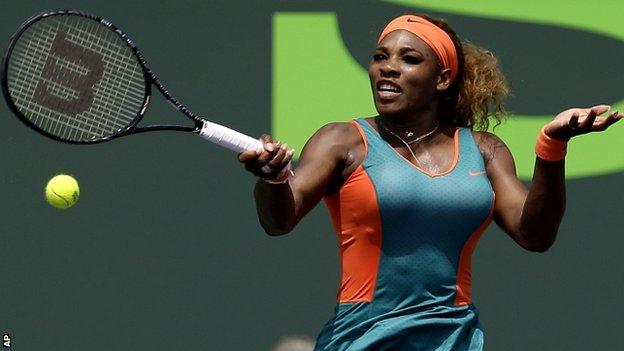 World number one Serena Williams overcame stubborn resistance from France's Caroline Garcia to reach the fourth round of the Sony Open in Miami.

Six-time champion Williams took two hours and 32 minutes, along with a rain interruption in the final set, to beat the world number 74, 6-4 4-6 6-4.

"I really gave myself a tremendous amount of trouble out there," she said.

It's not the way to play professional tennis, maybe amateur

"She was just hitting unbelievable shots on the match points," said Sharapova after a match that lasted nearly three hours.

"I kept asking myself how many more chances I had. I'm just so happy to go through."

British number one Andy Murray returns to action against Spain's Feliciano Lopez in the third round at 17:00 GMT on Sunday.

Wawrinka has lost just one of his 15 matches this year but admitted he is not completely used to the pressure that comes with being a Grand Slam champion.

"I still have some ups and downs mentally," said the Swiss. "I was negative in the second set a little bit stupidly, but then I'm really happy with the way I started the third set."

The earlier rain shower and lengthy matches meant Nadal did not get on court until late in the evening, and the Spaniard wasted little time in seeing off Hewitt in just over an hour.

"I am here to try my best I know how dangerous Lleyton is and I admire him so much," said Nadal, who is targeting a first Miami title.

Williams spent most of her victory gesturing, scowling and shouting at herself for a string of miscues.

"It's important to stay positive," said Williams. "Obviously I wasn't at my best, I had 40-something errors.

"It's not the way to play professional tennis, maybe amateur. On the professional tour you have to do a little better than that, so hopefully I can, in the next few matches, do better."

Monfils said on Twitter: "Apologies for my poor attitude in the 1st set. Rain delay now looking forward to getting back into the match and give 100% again."

Despite a more concerted effort after the rain break, Monfils still went down in straight sets as Spaniard Garcia-Lopez prevailed 6-2 7-5.

Fifth seed Angelique Kerber and eighth seed Petra Kvitova went through in the women's draw and will be joined by Ana Ivanovic of Serbia, who beat Italian Flavia Pennetta.

In the doubles, Britain's Colin Fleming and Ross Hutchins were beaten 6-4 6-4 by top seeds Bob and Mike Bryan, while Dom Inglot and Jamie Murray also went out with Treat Huey of the Philippines and Australian John Peers respectively.