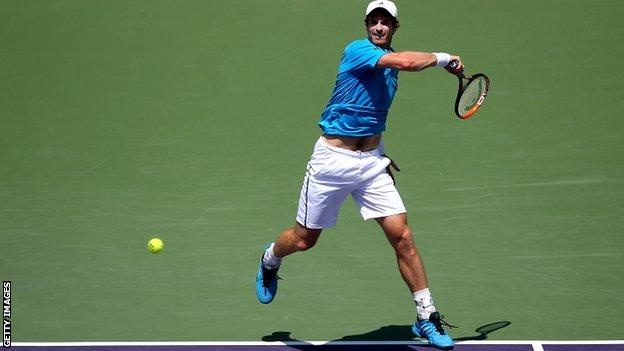 Defending champion Andy Murray swept past Spain's Feliciano Lopez in straight sets to reach the fourth round of the Sony Open in Miami.

The Briton had won all eight of their previous meetings and, with his now former coach Ivan Lendl watching from the stands, he made it nine in a row.

It was extremely humid. They are not easy conditions

Murray impressed under the watchful eye of Lendl, who only made the three-hour trip from his Florida home to watch the player he guided to Olympic, US Open and Wimbledon victories.

"We're back together again. It was only a four or five-day split," Murray joked afterwards. "No, it's a shame he won't be watching many more of my matches from the stands."

It is a big week for Murray, who has 1,000 ranking points to defend as the reigning champion, and he also had support from his father William, British Davis Cup coach Leon Smith and girlfriend Kim Sears among those watching from his player box.

The Scot, 26, has struggled for form in recent weeks and made a number of slow starts, but he flew out of the blocks on Sunday with a terrific break of serve to love.

Any thoughts that he was right back to his best were put on hold when Murray was then immediately broken, but his return game certainly looked in good shape as he moved ahead once again with a break at 2-2.

Lopez made just 39% of his first serves in the opening set and Murray took advantage, drawing the Spaniard into baseline exchanges that he was always going to be favourite to win.

A solid service game closed out the first set and a third break at the start of the second put him in complete control of the contest, with Lopez cutting an increasingly disconsolate figure on a hot afternoon in Miami.

When Lopez, 32, started leaking errors from his favoured forehand side to drop serve again, the end was within sight, and Murray wrapped up an encouraging performance with a return winner on match point.

"It's not always that easy to feel comfortable against him because there is not loads of rhythm with the way he plays, but I moved well, returned well," said Murray.

"I don't know how hot it was, but when we came over at like 9:30pm it was already 80 Fahrenheit (23 Celsius) and it was extremely humid.

"I've played a few matches here where it's been very, very hot, but it doesn't always stay like this for a few days in a row in March. They are not easy conditions."