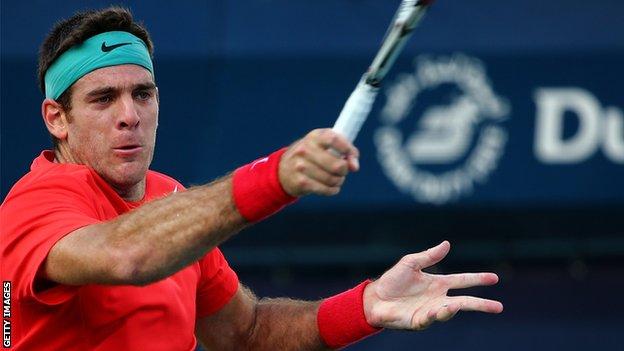 Argentine world number eight Juan Martin Del Potro is likely to miss the rest of the season because of a second wrist operation in four years.

The 25-year-old under went surgery on his left wrist on Monday after pulling out of the Sony Open on Wednesday.

US Open champion in 2009, Del Petro had surgery on his right wrist in May 2010 and was sidelined for eight months.

After winning the Apia International in Sydney in January, Del Potro withdrew from events in Dubai and Indian Wells.

"Obviously, it's not the easiest choice or the happiest moment of my career," Del Potro said on Facebook.

"I experienced a similar situation and I know how hard it is to be out of the tour - the desire to return, the endless weeks of recovery and how difficult it is to start fighting for the top spots in the rankings again."

Following the surgery, Del Potro added: "I'm still sore from the operation. Luckily everything went well. Thank you for all your affection."

Del Potro is right-handed but uses a two-handed backhand, and he has sometimes played with a single-handed sliced backhand in recent years to protect his wrist.