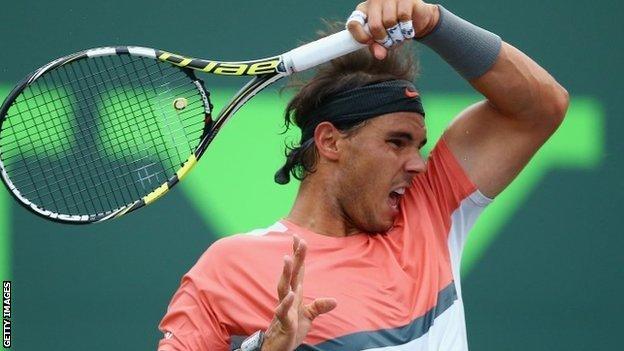 Rafael Nadal breezed into the fourth round of the Sony Open with a crushing 6-1 6-0 victory over Uzbekistan's Denis Istomin.

World number one Nadal took just 59 minutes to book his place in the last 16 as he seeks a first Miami title.

Nadal, 27, was joined in the fourth round by Australian Open champion Stanislas Wawrinka, who beat Frenchman Edouard Roger-Vasselin 7-5 6-4.

The result matches the Swiss's best effort in six visits to Miami.

Canadian 12th seed Milos Raonic also blasted his way into the fourth round with a 6-1 6-2 win over Spain's Guillermo Garcia-Lopez in 56 minutes.

Williams, 32, strolled to victory in 79 minutes and will face Germany's Angelique Kerber next in Miami.

Russian fourth seed Maria Sharapova recovered from a set down against Kirsten Flipkens, eventually prevailing 3-6 6-4 6-1 to reach the last eight.

She will face former Wimbledon champion Petra Kvitova for a semi-final place.

World number one Williams, who played in the orange and turquoise colours of the local Miami Dolphins American football team, in which she owns a minority stake, insisted her victory over Vandeweghe was tougher than the scoreline suggested.

Vandeweghe, ranked 103 places below Williams, forced six break points, but could not convert any.

"Coco has such an amazing serve, so every time I was returning I was like, 'Hopefully I can touch the ball'," she said.

Sharapova remains on course for a last-four meeting with world number one Williams, but must first negotiate her way past Czech Kvitova who turned around her match against former world number one Ana Ivanovic to win 3-6 6-0 6-0.

World number nine Kerber, who has lost in the first round of her last two tournaments, beat Ekaterina Makarova 6-4 1-6 6-3 to set up her clash with Williams.

In the men's doubles event, Britain's Jonathan Marray and Dutch partner Robin Haase were beaten 6-2 6-4 by the second-seeded pair of Daniel Nestor and Nenad Zimonjic.