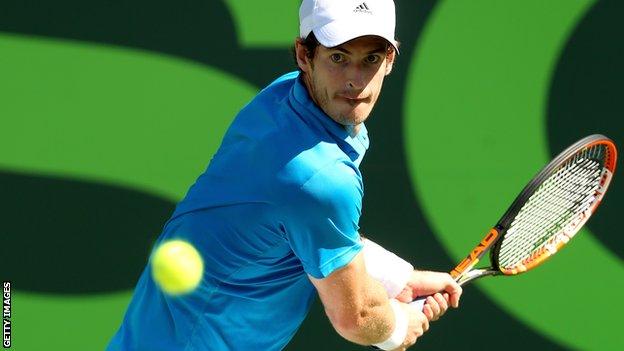 Andy Murray will face Novak Djokovic for the first time since the Wimbledon final after the Briton beat Jo-Wilfried Tsonga at the Sony Open in Miami.

Defending champion Murray saw off the Frenchman 6-4 6-1 to set up a quarter-final against second seed Djokovic.

Despite an impressive performance, Murray requested pain relief tablets for his back during the first set.

He went on to claim his first win against a top-20 player since undergoing back surgery in September.

"I need to see my physio, get some treatment and see what the issue is," said Murray.

"I was moving fine towards the end of the match, which is a good sign. I need to get myself checked out and get in good shape for tomorrow."

"All the top guys are still in play," said Djokovic. "There are no more clear favourites really on the court, so I'm going to get ready for that and hopefully perform my best."

The Miami venue was temporarily locked down on Tuesday when a suspicious package was found near the main entrance.

Police gave the all clear just moments before Rafael Nadal, a three-time runner up at the tournament, and Fognini stepped out on court for the final match of the day. Nadal cruised past Fabio Fognini 6-2 6-2.

The 13-time Grand Slam champion will play Milos Raonic in the last eight, with the Canadian beating Benjamin Becker 6-3 6-4.

Murray faces a tough task to retain his title and avoid slipping from sixth to eighth in the world rankings, but he looked sharp from the outset against Tsonga, breaking as early as the third game.

While his game looked in good order, Murray pulled up and grabbed his left hip after reaching for a backhand in the fifth game before gesturing towards his support team at the changeover, saying "It's been three years!"

Murray called for the doctor and asked for tablets to ease the pain, but once back on court he continued to dominate, making over 70% of first serves and looking especially impressive on the forehand side.

Tsonga had lost eight of nine matches against Murray, including the last seven, and he could not cope with the constant pressure exerted by his opponent's returning.

Murray attacked the net to guide away a high volley for another break at 1-1 in the second set, before breaking the Frenchman's serve to love at the next opportunity for 4-1.

Moving freely, the Briton reeled off 15 of the last 16 points to set up an enticing repeat of last July's Wimbledon final against Djokovic.

"This will be the fifth time we've played in this tournament alone, we always seem to be in the same part of the draw. We haven't had too many close matches here, so maybe we're due a close one."

There were surprise defeats for Australian Open champion Stanislas Wawrinka and fourth seed David Ferrer, with Wawrinka losing 6-4 3-6 6-1 to Alexandr Dolgopolov and Ferrer going down 7-6 (9-7) 2-6 7-6 (11-9) to Kei Nishikori.

In the women's draw, Maria Sharapova battled past former Wimbledon champion Petra Kvitova 7-5 6-1, and the Russian will face Serena Williams in the semi-finals after the American beat Angelique Kerber 6-2 6-2 in 62 minutes.

Sharapova is bidding to reach the final in Miami for the fourth successive time, however she has lost her last 14 meetings with the world number one.