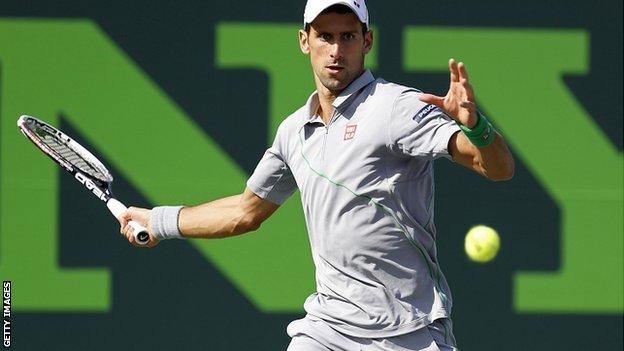 Top seeds Rafael Nadal and Novak Djokovic will meet in Sunday's Sony Open final after both their opponents pulled out of the semi-finals in Miami.

Djokovic, the second seed, progressed when Japan's Kei Nishikori withdrew from their match with a groin injury.

And Nadal also went through without hitting a ball after Tomas Berdych was laid low by gastroenteritis.

"I woke up at 7.30am with pain in my stomach," said the Czech seventh seed.

I couldn't move from side to side

"I am disappointed about not getting a chance to play."

Nishikori, who beat Roger Federer in the quarter-finals, felt a problem when he went for his morning warm-up on Friday.

"I really felt it in the last match against Roger, the quarter-final. I had it before Indian Wells, and I hurt it in Delray. It wasn't 100% yet."

Djokovic, who is trying to win the Miami title for the fourth time, also had a walkover in the third round when Florian Mayer pulled out with a groin injury.

"I practised today, 30-40 minutes on centre court, got good rhythm and trying to keep up with what I have been doing.

"I won in Indian Wells, which gave me a lot of confidence. I've played a lot of matches so hopefully it will pay off."

Nadal and Djokovic will meet for the 40th time on Sunday, with the Spaniard 22-17 ahead in their personal battle but having lost the last two encounters.