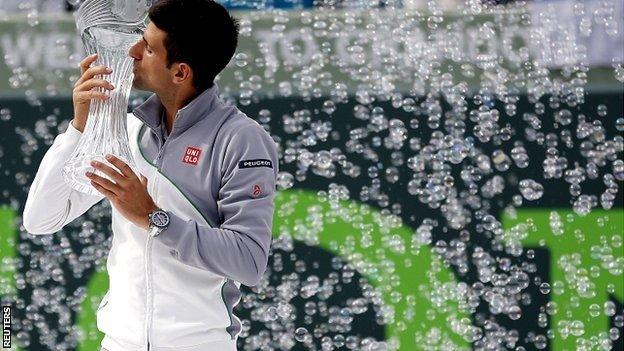 Novak Djokovic took his winning run against world number one Rafael Nadal to three matches with a superb victory in the Sony Open final.

The Serb, 26, won 6-3 6-3 to claim his fourth Miami title, moving him ahead of Pete Sampras and two behind Andre Agassi in the event's all-time list.

Djokovic, the world number two, broke serve once in the first set and twice in the second as he dominated Nadal.

The pair now hold all nine elite Masters 1000 titles between them.

Most meetings in Open era

Nadal, 27, will hope to regain the initiative as the tour heads to Europe for the clay-court season, with Djokovic having won back-to-back hard-court Masters titles in Indian Wells and Miami.

Djokovic might have been without head coach Boris Becker, who is recovering from hip surgery, but he could not have played much better as the world's top two players met for a record 40th time on Sunday.

The Serb saved a break point in the opening game and began to put the pressure on Nadal, moving 4-2 clear when a huge forehand clipped the back of the baseline.

He closed out the set after 40 minutes and tightened his grip further with another break at the start of the second, moving Nadal from side to side before firing a backhand winner into the space created.

Nadal was hanging on as best he could, and he fired a brilliant forehand winner down the line to stave off another break point at 3-1 down, but his hopes of finally landing a first Miami title were slipping away.

Djokovic attacked the Spaniard's serve once again at 5-3 to earn two more break points and converted his first match point in a stunning 30-shot rally that ended with a half-volley into the open court.

"This tournament has been perfect from the beginning to the end," Djokovic said. "The matches that I have played I played really well, and I elevated my game as the tournament progressed. The best performance of the tournament came in the right moment on Sunday, against the biggest rival."

Nadal said: "No frustration. That's tennis. I played a few games and a few points with right way, with right intensity. But for the rest, easy to analyse. The opponent was better than me. That's it."