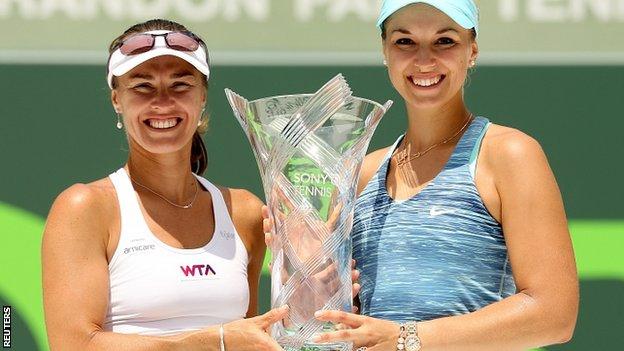 Former world number one Martina Hingis won her first title since 2007 as she teamed up with Sabine Lisicki in the Sony Open doubles.

Hingis, 33, claimed her last title seven years ago in Doha before retiring later in 2007, only to return in some doubles events last year.

She has won five Grand Slam singles and nine doubles titles in her career.

Hingis has history in Miami

Hingis won the singles title in Miami in 1997 and 2000, beating Monica Seles and Lindsay Davenport respectively, and she won the doubles title in 1998 and 1999 alongside Jana Novotna.

Hingis won just three of the five matches she played when making her comeback alongside Daniela Hantuchova last year.

Miami was Hingis and Lisicki's second tournament together, after they lost in the first round in Indian Wells, and the pair saved seven match points in their quarter-final against Anabel Medina Garrigues and Yaroslava Shvedova.

The wildcard team then won the last seven points of the deciding super tie-break against sixth seeds Makarova and Vesnina to give Hingis her 38th WTA doubles title.

Hingis is projected to move to 60th in the new doubles world rankings, while Lisicki will move up to 36th.

Asked if she planned to continue her doubles comeback, Hingis said: "Two weeks ago if you asked me, it probably would be a completely different answer from today.

"Last week, I was not sure if I want to put myself out there like this and lose first, second round.

"Now, after this victory, definitely things change. I would be very happy to continue to play some more doubles."