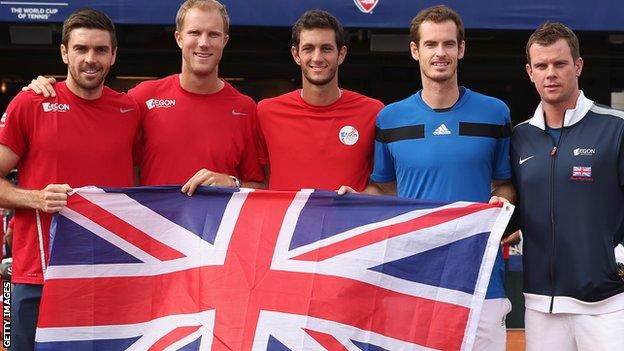 Britain's Davis Cup captain Leon Smith says he will go with his "gut instinct" when he decides who will fill the second singles spot against Italy.

Britain are in their first Davis Cup quarter-final in 28 years.

World number 13 Fabio Fognini and Andreas Seppi, ranked 34th, are set to feature for the home side.

"We don't have a standout number two in the way the Italians have, but I actually think whoever goes out will perform well," said Smith on the eve of Thursday's draw.

Discussing his willingness to make the choice on instinct, Smith said: "In the past, I've gone with that once I've weighed up all the factors and got a feeling on who I think is maybe best suited to this particular moment."

He added that the key was choosing a player who could "upset Seppi".

The weather may also play a part in Smith's decision.

With thunderstorms are forecast for Friday and Saturday, the court - built just a few metres from the Bay of Naples - will slow down if there is a lot of moisture in the air.

Smith could leave both Ward, who beat Sam Querrey, then ranked 45th in the world, in the world group first-round tie against the United States in February, and Evans in the four-man team to increase his options for Sunday's reverse singles.

Such a move would stop him adding Ross Hutchins to the team.

Hutchins has travelled to Italy as a reserve and his inclusion would allow him to team up with regular partner Colin Fleming in the doubles if a late decision was made to rest Murray.

Fognini, meanwhile, says he is "85-90%" confident he will be fit to play, despite being troubled by a quadriceps injury in recent weeks.