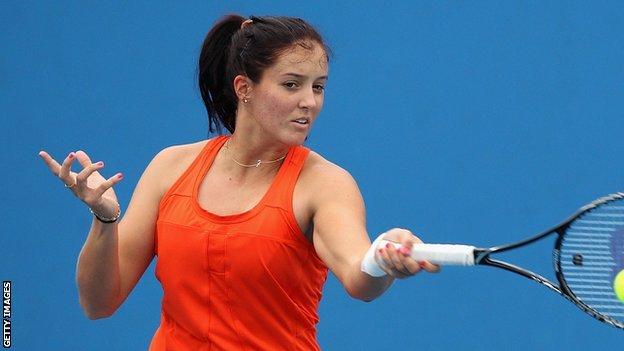 British number one Laura Robson will miss the French Open and Wimbledon after having minor wrist surgery.

The 20-year-old world number 64 has completed just one match this year - a first-round defeat by Kirsten Flipkens at the Australian Open.

This year could be a virtual write-off for Laura Robson. Even if she is able to resume playing in time for August's US Open, she will struggle to make an impact with so few matches under her belt. It must be hard for her to see peers like Eugenie Bouchard reach the semi-finals of the Australian Open, and frustrating not to be able to get to work properly with her new coach, Mauricio Hadad. But she's in the best hands with Dr Richard Berger, who has also operated on both of Juan Martin del Potro's wrists.

Writing on Facebook, she said her surgeon, Dr Richard Berger, was "very confident" she will be back "pain-free before you even have time to miss me".

The Melbourne-born left-hander reached the last 16 at Wimbledon in 2013.

This year's French Open gets under way at Roland Garros on 25 May, with Wimbledon running from 23 June to 5 July.

Robson, who has been as high as 27 in the world, withdrew from the ASB Classic in New Zealand in December because of a problem with her left wrist.

A week later, she retired from the Hobart International with the same injury while leading her first-round match against Belgium's Yanina Wickmayer. An injury to her right wrist also forced Robson to miss the Rogers Cup last August.