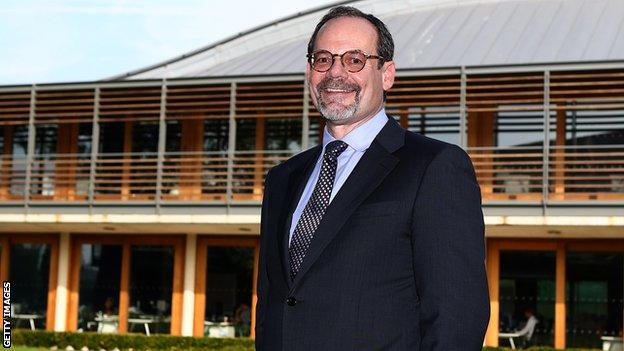 Michael Downey's first 100 days in charge of British tennis have taught him that he needs to help breed a "tougher" and "hungrier" generation of elite players.

The Canadian was appointed chief executive of the Lawn Tennis Association (LTA) last September, taking over an organisation that was under pressure to increase national participation in the sport and hoping to improve the nation's meagre tally of only two singles players in the top 100, with Andy Murray ranked eighth in the world.

"Does the average player and the average coach in Britain actually know what it takes to succeed?" he asked as he sat down to talk to a group of tennis writers at Rafael Nadal's favourite Spanish restaurant in London.

"Are we at times doing too much for the talent that is coming up? We need to make them hungrier."

He said: "I talked with Jeremy Bates (the head coach of women's tennis at the LTA) and he made a very good point. He said it's important that the best kids in Britain have to go on the road and play in a country that may not have great facilities, and learn to lose in the first round and actually have to stay there and train in those conditions before they move on.

"We don't have those conditions here in Britain. When you play in a Challenger in Britain, it's a very good environment. That's great that we can deliver that, but it's actually also not the real world and what these kids are going to face when they are out there 30 or 40 weeks a year.

"And that's a toughness we have to create because I think we're competing with countries, whether you want to admit it or not, where for some of those kids it's about getting to a better life. It's not just about succeeding in tennis."

Before slipping into the chief executive's chair at the LTA, Downey ran tennis in Canada, where he employed the Grand Slam-winning coach Bob Brett as a consultant.

Brett is currently touring Britain's high-performance centres and will report back to the LTA in June on what he thinks should be done to improve the lack of top talent.

Downey believes the organisation has lacked focus in the past. He talks like a man who is preparing to take on some vested interests and who will not worry if he puts a few noses out of joint in the process.

"We've got a meeting coming up shortly and one of the things we are going to talk about is what our coaches believe are the top 15 or 20 kids in the country," he said.

"And I want to take no prisoners. It's not about who is the coach or where the player plays. Put aside who owns what - what is in the best interests of the player?"

He then related the story of the world number nine Milos Raonic, who was on the edge of the top 150 at the age of 19 when Tennis Canada decided he would be better off training in Spain.

Downey recalled: "I remember Milos saying to me after a year there, and he was sitting in the top 100 (in fact, the top 30) and I asked him what the fundamental difference was, and he said 'mindset'.

Downey, along with Brett, is also conscious of the need to develop more home-grown coaches and nurture those already charged with processing Britain's precious raw materials.

There will clearly be a role for players who have competed at the highest level - players like Greg Rusedski, who has just been asked to guide 19-year-old Kyle Edmund in the next stage of his career.

"When Eugenie Bouchard won junior Wimbledon here two or three years ago," he said, apologising for producing another anecdote from Tennis Canada's back catalogue, "she was being coached by Nathalie Tauziat from France.

"I remember asking Nathalie what did you actually say to Eugenie before she went out to try to win junior Wimbledon? She said: 'I was here once before and I lost (to Jana Novotna in the 1998 Wimbledon singles final) and I never got it back, so you better leave it out on the court.' Only a player or coach who's been there can actually say that."

The LTA's primary role these days is to increase participation, but that will be even harder without Grand Slam or Davis Cup success.

Downey accepts that Britain is currently punching below its weight and he has now given a few clues as to how he intends to redress the balance.