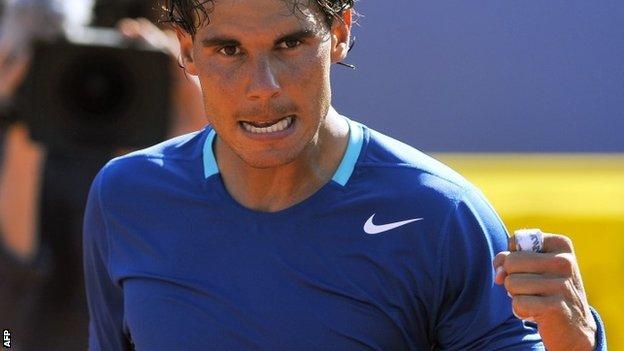 World number one Rafael Nadal recovered from last week's early exit in Monte Carlo with a straight-sets win over Albert Ramos at the Barcelona Open.

Eight-time champion Nadal won 7-6 (7-2) 6-4 to claim his 40th consecutive victory at the tournament.

The 27-year-old's only loss in Barcelona came on his debut in 2003 as a 15-year-old against Alex Corretja.

Nadal has lost just three sets during his 40-match winning streak in Barcelona, dropping the last one in the second set of the 2008 final against Ferrer.

"Three weeks ago I lost to Ferrer in Miami but I dominated that first set," said Gabashvili.

"Today, I wanted to maintain my energy and keep it going, which I did for 90 minutes, but any more and it might have been tougher to win."

There were other surprise results as Italian third seed Fabio Fognini retired injured while losing 6-0 4-0 to Santiago Giraldo of Colombia and eighth seed Alexandr Dolgopolov of Ukraine lost 7-6 (7-5) 6-3 to Spain's Albert Montanes.

Nadal was made to work hard against fellow Spaniard Ramos, ranked 103rd, and said: "After losing in the Monte Carlo, I wanted to raise my game here. It just took a while.

"I had to accept that I was going to be made to work today, that I was not playing at my best level, but I got through it."