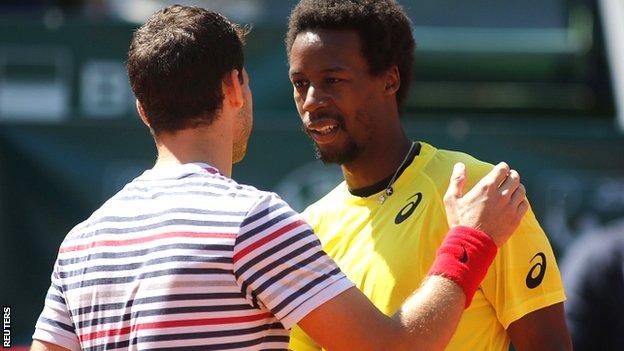 Monfils twisted his right ankle when walking onto court in Bucharest and quit at 5-1 down after just 16 minutes.

Monfils, who withdrew from the Casablanca Open with an ankle injury earlier in the month, revealed that he had rolled his ankle, and after winning his first service game he was clearly feeling discomfort.

Bulgaria's Dimitrov will head into Sunday's final looking to win his third ATP title and second of 2014.

"It is disappointing for Gael," said Dimitrov. "As much as I am happy, it is an undeserved win and unfortunately it had to end that way.

"I saw what happened. I hope he will be OK for the coming weeks."

At the Barcelona Open, Spain's Nicolas Almagro could not build on his quarter-final winner over Rafael Nadal as he went down 7-5 6-3 to Colombian Santiago Giraldo.