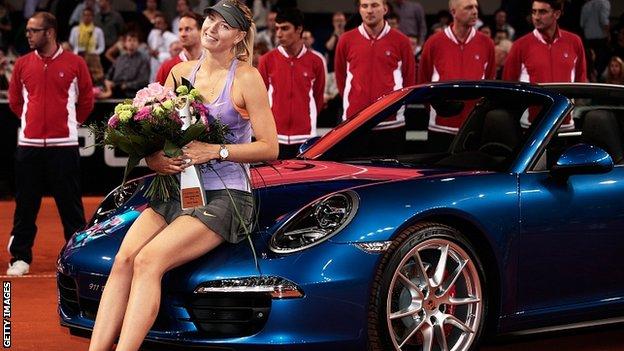 Ninth seed Ivanovic, 26, powered 5-0 ahead on her way to leading by a set and a break, but Sharapova hit back with 11 of the last 13 games.

"That was a tough bit of work," said the four-time Grand Slam champion.

"For the first half of the match I thought it might not be my day today, but somehow I turned it around.

"I had quite a slow beginning to the year, but me and my team have been working hard to get in the position to win titles again, and I'm so happy to be able to do it here."

Ivanovic had lost seven of her previous nine matches against against Sharapova, including the last six in a row - the last three of which were on clay - but the Serb came out swinging freely.

The 2008 French Open champion's forehand dominated the opening stages of the final and she was on course for a love-set, but there were signs of nerves creeping in as she failed to serve it out.

Sharapova could not save the opening set and at 3-1 down in the second was in real danger of a first defeat in Stuttgart.

However, the 2012 French Open winner began to target her opponent's backhand and the momentum shifted dramatically as Sharapova raced to the finish line.

"She's just a great player, and that's what happens when you play against great players in big matches like this," said Ivanovic.

"You need to use your opportunities. But there's always next time."