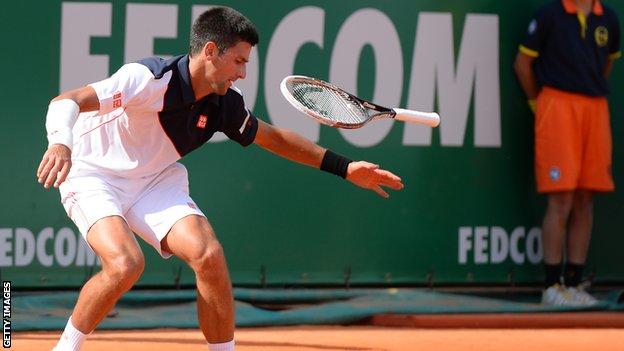 World number two Novak Djokovic has pulled out of this week's Madrid Masters, saying his right wrist injury has "flared up again".

Djokovic, 26, had hoped the injury was not as serious as first thought after exiting April's Monte Carlo Masters.

The Serb hopes to be fit to compete in Rome next week - his last chance of top-level competition before the French Open begins on May 25.

"I did everything possible in order to play in Madrid," he said.

"Now I will take some time to recover and heal my injury."

The six-time Grand Slam winner's next scheduled tournament is the Internazionali BNL d'Italia, which begins on Sunday, May 11.

He had won consecutive Masters 1000 titles in Shanghai, Paris, Indian Wells and Miami before losing to Roger Federer in the semi-finals in Monte Carlo.

The French Open is the only Grand Slam Djokovic has yet to win, although he came close to beating Rafael Nadal in last year's semi-finals, before losing in five sets.

World number one and top seed Serena Williams began the defence of her Madrid Masters title with a comfortable first-round win over Belinda Bencic.

American Williams took 21 consecutive points on the way to a 6-2 6-1 victory against the 17-year-old Swiss.