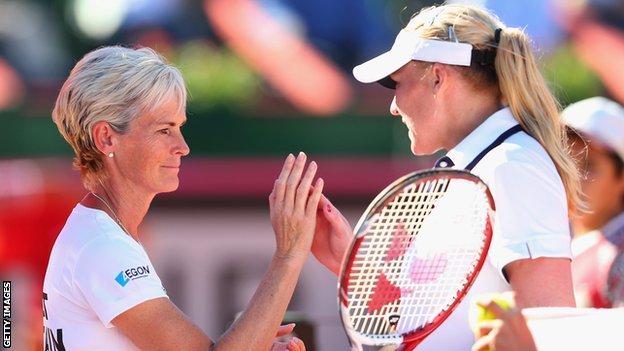 Judy Murray, the mother of Wimbledon champion Andy Murray, has paid tribute to Elena Baltacha, who died of liver cancer at the age of 30 on Sunday.

Murray coached Baltacha as a junior in Scotland and then worked with her as captain of Britain's Fed Cup team.

"A conversation in 2012 summed up her spirit. It began with an expectation that she would announce her retirement and ended with talk of her reclaiming the British number one spot."

"She was one in a million," said Murray. "An absolute gem."

She added it was "an awful loss" for tennis, those who knew and loved her, but most of all for her husband Nino Severino and her family.

Murray added further: "I don't have the words to say what an incredible person Bally was, how loved she was or what an inspiration she will continue to be to everyone who met her."

Andy and Jamie Murray were among a group of current and former players who paid tribute to Baltacha with a minute's silence at the Madrid Masters on Monday.

Baltacha, who was British number one for nearly three years and retired in November 2013, learned she had liver cancer in January 2014 - two months after retiring and only a few weeks after marrying her former coach Severino.

The mixed doubles exhibition matches at the Aegon Championships at Queen's Club, the Aegon Classic in Birmingham and the Aegon International in Eastbourne will raise money for the Royal Marsden national cancer charity and the Elena Baltacha Foundation.