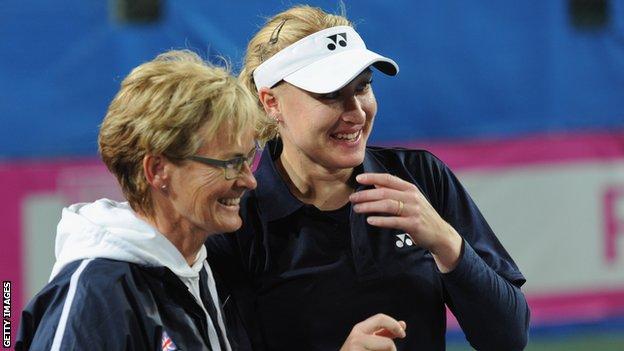 When yet another attempt to turn around British tennis was launched almost 10 years ago, the buzz phrase was "we need warriors".

In Elena Baltacha, they already had one.

She might have been a kind, friendly and irrepressibly positive 'warrior', but Baltacha's aggressive baseline style reflected an inner steel that pulled her through far more serious matters than tennis matches.

A conversation in 2012, when she was 28, summed up her spirit. It began with an expectation that she would announce her retirement and ended with talk of her reclaiming the British number one spot.

"I think anything is possible," she said. "I'm not ruling anything out."

Diagnosed with a chronic liver condition at 19, Baltacha would go on to break into the world's top 50, as well as fulfil her dream of becoming an Olympian and the heart and soul of Britain's Fed Cup team.

That she should succumb to liver cancer just months after retiring and marrying her former coach, Nino Severino, with a future nurturing young talent at her academy in Ipswich ahead of her, is the cruellest of blows.

Along with the liver condition, Baltacha's career was blighted by injuries, and a back problem in 2007 saw her tumble down the world rankings to 660, from a position close to the top 100.

It says everything about her that she not only battled her way back but also went on to surpass her previous best, breaking the top 100 for the first time in 2009 and reaching the heady heights of 49 with top-10 wins over Francesca Schiavone and Li Na in 2010.

Any catch-up with Baltacha throughout her career usually began with a run-down of her current health issues and, while there must have been plenty of dark moments in private, the public face always carried a smile, a joke and the promise of better to come.

Victory against the seeded Amanda Coetzer as an 18-year-old at Wimbledon was arguably the stand-out result of her career but representing Britain at the London Olympics was the pinnacle for her.

From carrying the torch in Kent, to collecting her accreditation and visiting the athletes' village, to winning her first-round match, London 2012 meant everything to Baltacha.

Her father Sergei won a bronze medal playing football for the USSR at the Moscow Olympics in 1980, before the family moved to the United Kingdom when he signed for Ipswich Town in 1988.

Baltacha's mother, Olga, had been scheduled to compete in the pentathlon in Moscow, but had to stay at home to look after Elena's brother, Sergei.

"I always knew that it had been very painful for her to miss out," said Baltacha, whose qualification was in doubt ahead of London.

"It's only recently, when I went through it myself, that I really understood how much it must have hurt."

Twelve years of Fed Cup service saw Baltacha and her long-time rival and friend, Anne Keothavong, keep Britain competitive before the arrival of Laura Robson and Heather Watson made for a team of real promise.

The bond with Judy Murray was particularly strong as Britain's Fed Cup captain had ferried Baltacha to tournaments from under-14 level.

"She's a tough cookie," was Baltacha's description of Murray, and the feeling was mutual.

While her career record might not match up to the stellar names in tennis, the high points were those of a player who proved she was world class against seemingly insurmountable odds.

And there is every reason to believe that Baltacha's impact on British tennis was far from over despite her retirement in November.

The zeal with which she and husband Nino threw themselves into her EBAT academy in Ipswich promised much, and she was surely a Fed Cup captain in waiting.

If any young player was looking for guidance, British tennis was blessed with Baltacha and her fellow Scot Andy Murray.

Back to that conversation in 2012 and, despite her determination to overcome injury once again, it was heartening to know that Baltacha understood her place in tennis.

"If I come back and I'm not British number one, I'm still going to be very happy with what I've achieved - being top 50, all my top-10 wins," she said. "I will always be very, very proud of what I achieved."