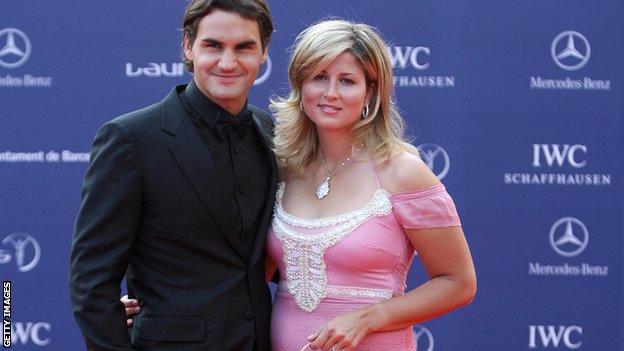 Roger Federer's wife Mirka has given birth to their second set of twins.

Federer, 32, pulled out of this week's Madrid Masters tournament on Tuesday as the Swiss world number four chose to be with his wife for the birth in Zurich.

"Mirka and I are so incredibly happy to share that Leo and Lenny were born this evening," tweeted Federer, who is likely to miss next week's Rome Masters.

Federer, whose older sister Diana also has twins, is expected to return to tennis at the French Open, which starts on 25 May.

The 2009 champion at Roland Garros has not missed a Grand Slam tournament since 2000.

Federer, who won the last of his Grand Slam titles at Wimbledon in 2012, last played three weeks ago when he lost to countryman Stanislas Wawrinka in the final of the Monte-Carlo Masters.

In the women's tournament, eighth seed Maria Sharapova came back from 4-1 down in the final set to beat American Christina McHale 6-1 4-6 6-4 in round two, while China's second seed Li Na beat compatriot Chinese Zheng Jie 6-2 6-3.