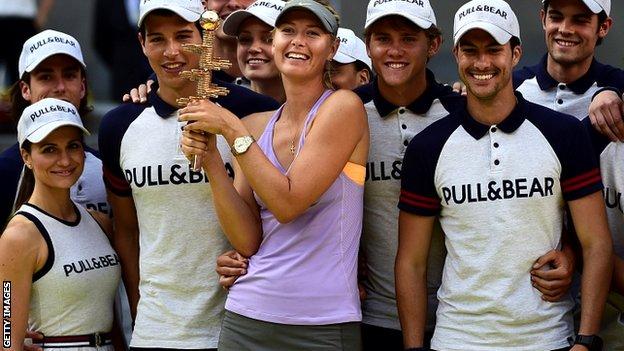 The former world number one battled back to win 1-6 6-2 6-3 and extend her unbeaten run on clay to 11 matches.

Eighth seed Sharapova, 27, has only lost three times on clay since 2011 - all three defeats coming against world number one Serena Williams.

After saying in her early years that her movement on clay was like that of "a cow on ice", Sharapova has now won nine titles on the surface. That puts her level with Venus Williams as the third most successful active player on clay, one behind Anabel Medina Garrigues and Serena Williams with 10 each.

Halep was playing in her first final at one of the WTA's Premier tournaments.

The 22-year-old has enjoyed a remarkable 12 months in which she has risen from outside the world's top 50 to number five in the rankings, winning seven titles along the way.

She looked capable of capturing the biggest prize of her career after dominating the first set, but Sharapova wrestled the initiative away from the Romanian early in the second.

A brilliant backhand winner from out wide gave Sharapova the decisive break at 3-1 in the decider and she closed out the win with a heavy forehand after one hour and 57 minutes.

"I don't take these moments for granted because I know what it's like to be injured and trying to find your way back just to play tennis," said Sharapova, who missed the second half of last season with a shoulder injury.