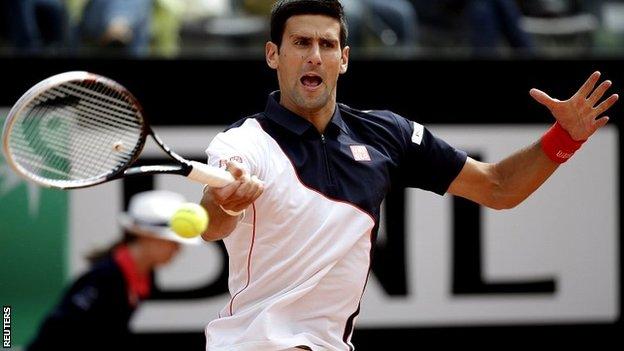 Novak Djokovic showed no signs of discomfort in his first match back following a wrist injury as he beat Radek Stepanek at the Italian Open.

Djokovic at the Masters

Djokovic is making his first appearance since losing to Federer in the Monte Carlo semi-finals last month. The Serb had won the previous four ATP Masters 1000 titles, inlcuding the first two of 2014. He has won 44 of his last 47 matches.

Rafael Nadal, Roger Federer and Serena Williams are scheduled to play on Wednesday, along with Britain's Andy Murray, who takes on Spain's Marcel Granollers.

Federer, 32, returns to competition just a week after his wife, Mirka, gave birth to twin sons.

Djokovic was watched by new head coach Boris Becker and Marian Vajda, with whom he has worked since 2006, and he made an uncertain start on a damp and windy afternoon at the Foro Italico,

The two-time Rome champion dropped serve in the opening game but, after recovering from 40-0 down to take the next after nine minutes, he eased through the first set.

A straightforward win looked on the cards when Djokovic broke early in the second, but he was pegged back to 4-4 and then failed to serve out the match at 5-4, eventually sealing victory at the second attempt after one hour and 37 minutes.

"I expected to be a little bit rusty on the court, the conditions didn't help, but generally it was a good win," said Djokovic.

"I'm happy with that and hope to elevate my performance in the next one."

Last season's French Open finalist and fifth seed David Ferrer of Spain continued his build-up to Roland Garros at the end of the month by beating Mikhail Kukushkin of Kazakhstan 6-1 6-2.

In the second round of the women's event, second seed Na Li of China beat Australia's Casey Dellacqua 6-1 6-4.