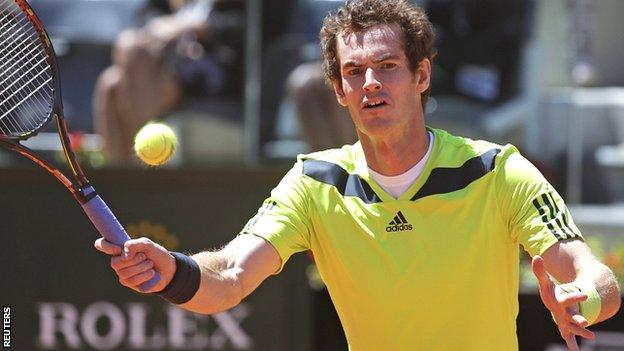 Britain's Andy Murray overcame Spanish opponent Marcel Granollers and testing windy conditions to reach the third round at the Italian Open in Rome.

The Wimbledon champion beat the world number 31 6-2 7-5 and will next face Austria's Jurgen Melzer.

Should Murray win that match, he could face world number one Rafael Nadal in the quarter-finals.

Nadal is in action later on Wednesday, along with Roger Federer, Serena Williams and Maria Sharapova.

Murray, who turns 27 on Thursday, coped well in swirling wind at the Foro Italico to claim a much-needed victory - only his second of the European clay-court season.

"I did a very good job, it was hard conditions," said Murray. "It affects significantly the way you play and the way you would like to play.

"I tried to serve high percentage, but when you throw the ball up from one hand it can blow behind or in front of you, and it depends on what side of the court you are on.

"But you have to play the wind, try to use it to your advantage if you can. I thought I did a good job of that."

The Scot had faced Granollers at the same stage in Rome last year and was forced to retire after the first set with the back injury that would see him miss the French Open and require surgery later in the year.

Murray is still looking for his best form and working his way back up the rankings, having slipped to eighth, while the search continues for a new coach following the departure of Ivan Lendl in March.

All those issues - and with the French Open just 11 days away - lent a greater significance to Wednesday's encounter with Granollers, and Murray came through with plenty to spare.

He made 90% of his first serves and only nine unforced errors in the opening set as he managed the conditions better than Granollers.

The gusting wind proved as tricky as his opponent and the groundstaff took to watering the court between games to try and keep the clay top-surface from blowing into the players' eyes.

A loose game saw Murray drop serve at the start of the second set but he won a punishing 36-shot rally at 30-30 in the next game on his way to levelling at 1-1.

Murray maintained the momentum, reeling off 15 points in a row on serve at one stage, and he got the decisive break in game 12 to wrap things up before the need for a tie-break.