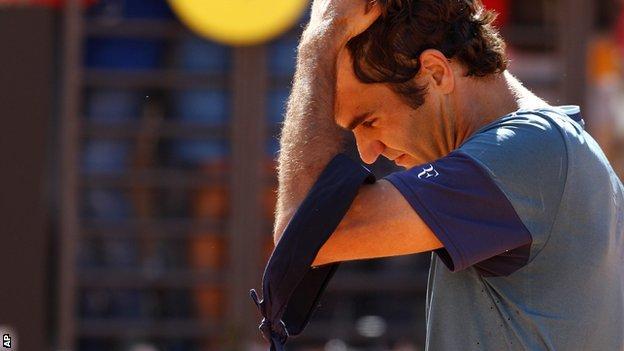 Roger Federer's first match after the birth of his twin sons ended in defeat as he lost 1-6 6-3 7-6 (8-6) to Jeremy Chardy at the Italian Open in Rome.

The 32-year-old Swiss had been expected to miss the event, but was convinced to take part by his wife and support team.

Federer had a match point in the final tie-break of the second-round match, but a superb forehand pass from Frenchman Chardy denied him victory.

Federer was making his 14th appearance in the Italian capital and his search for a first victory goes on. He has reached the final three times, in 2003, 2006 and 2013, but it remains one of three ATP Masters 1000 titles (along with Monte Carlo and Shanghai) he has yet to win.

"This [defeat] is totally OK if it doesn't hurt," said Federer.

"I tried everything. I can't do more than that on the court."

Federer will get an unexpectedly quick opportunity to reunite with his family and will not play again before the French Open, which begins on 25 May.

Chardy, ranked 47th in the world, failed to make much impression in the first set, but thereafter took advantage as Federer struggled with the swirling winds at the Foro Italico.

It came down to a decisive third-set tie-break, and Chardy grabbed the initiative with that stunning forehand when facing match point.

"That passing shot is a tough one for me to take, because he's not going to make that very often," said Federer. "But it happens and credit to him to fight his way back into the match and get it."

He added: "Everything is under control. I still feel good, my body is good, my mind is good and it's just unfortunate, for one passing shot today I don't get another opportunity to play this week."

Chardy will play Ivan Dodig in the last 16, as world number four Federer's hunt for a first Rome Masters title goes on.