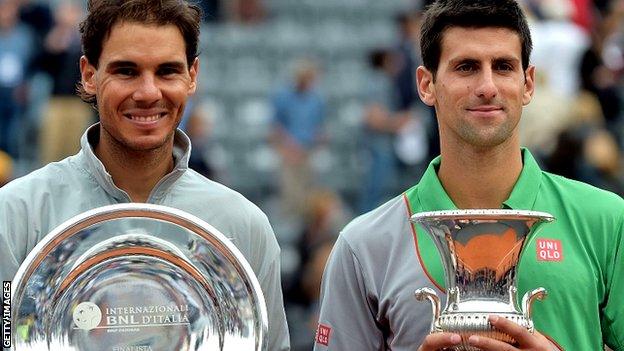 Novak Djokovic won his third Italian Open title and laid down a marker for the French Open with victory over Rafael Nadal in the Rome final.

The Serb has now won four matches in a row against Nadal, and has been victorious at five of the past six ATP Masters 1000 events.

This year's French Open, where Nadal is eight-time champion, begins on Sunday.

Despite his daunting record in Paris, and last year's dramatic semi-final win over Djokovic, the Spaniard might not return to Roland Garros as favourite.

It is the first time since 2004 that Nadal, who was beaten in the quarter-finals in Monte Carlo and Barcelona, has lost more than two matches on clay in a season.

"I was able to find positive things during the tournament but I played three very tough matches this week and it was very hard mentally, as well as physically," said Nadal

"I was a little bit tired."

Djokovic said the victory had come at the end of an emotional week following severe flooding in his home country which has left at least 35 dead and forced tens of thousands of people to flee their homes.

"People are struggling, people are losing homes," he said. "There has been a lot of casualties, but the government is not able to name and to number because they are still discovering new bodies as the flood is backing up.

"So it's been a very emotional week for me. Part of me is very happy to win the tournament here in Rome - it is a big one in our sport. On the other hand, my thoughts and all my love is with my people in Serbia."

Djokovic made an edgy start to the final and slipped two breaks down at 4-1 but, once he found his range, it was the Serb who began to dictate.

Nadal, 27, recovered from 0-40 on his way to closing out the first set but the momentum was with Djokovic.

Although he dropped serve when distracted by a crying baby in the crowd, he broke twice to level the match.

A scintillating passage of play saw Djokovic reel off five games in a row, his return of serve causing Nadal all sorts of problems as he broke early in the decider.

Nadal battled hard to stay in touch, punching his fist and roaring to the crowd after holding serve at one point, and his fighting spirit paid off when he got back on level terms at 3-3.

It only sparked another barrage of brilliant returning from Djokovic, however, and the six-time Grand Slam champion broke once more in the following game, matching Nadal with a huge fist pump of his own.

Djokovic then dismantled the Nadal serve for the sixth time to seal victory - only his fourth against the Spaniard in 17 matches on clay.