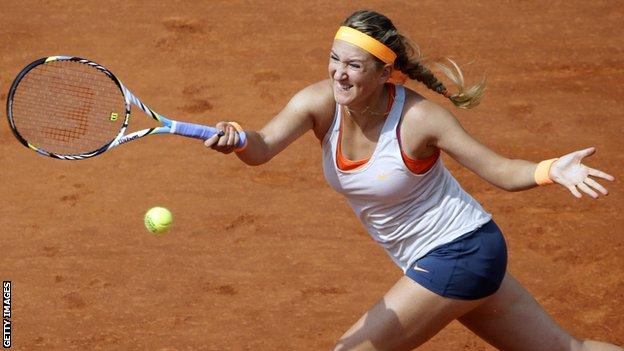 Victoria Azarenka has confirmed she will miss this month's French Open.

The world number five from Belarus is still recovering from a foot injury that forced her to withdraw from tournaments in Doha, Miami, Madrid and Rome in recent weeks.

"Unfortunately I will not be able to compete in Roland Garros this year," the two-time Australian Open champion, 24, wrote on her Twitter page.

"Working hard on my recovery and getting back on court."

Azarenka has played just one match in the past two months - losing to American Lauren Davis at Indian Wells in early March - because of an injury to her left foot.

The problem flared up during the defence of her Australian Open title in January, where she lost to Poland's Agnieszka Radwanska in the quarter-finals.

The French Open begins on Sunday and runs until 8 June.