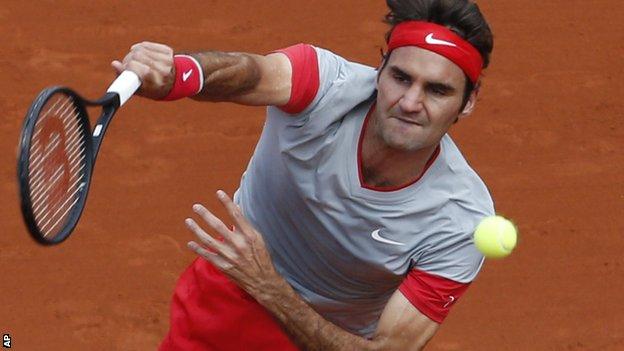 Roger Federer outclassed Lukas Lacko to claim an easy straight-sets win in the first round at Roland Garros.

Top seed Serena Williams began the defence of her title with a 6-2 6-1 win over France's Alize Lim.

The American looked unhappy with her game at times, but was mostly untroubled at the start of her pursuit of a third French Open.

Radwanska took a firm grip on the match after breaking her Chinese opponent's serve with the score at 3-3, and the Pole, a semi-finalist at Wimbledon last year, won nine consecutive games to wrap-up victory.

"I think it was a very wet court," said Radwanska. "I think the courts are not always dry, it's raining every day, so it makes the courts much slower."

Roger and out for Lukas

Federer dominated after breaking Lacko's serve in the fifth game of the match, which he sealed with a forehand winner on his second match point.

The Swiss, knocked out in the quarter-final by Jo-Wilfried Tsonga in 2013, will face Diego Sebastian Schwartzman for a place in the last 32 following the Argentine's 6-4 6-2 7-5 win over Gastao Elias of Portugal.

"I think today with my experience I'm more laid back going into a tournament, going into a first round of a Grand Slam," said the 32-year-old, who first played in Paris in 1999.

"I don't get too worked up about it, because I know it's a long match maybe potentially ahead of me and it's not a sprint to the finish line, it's more of a marathon."

Williams made 36 unforced errors and served four double-faults in a match which lasted 78 minutes, but her inexperienced opponent could not capitalise on the world number one's mistakes.

Lim, who was making her debut at a Grand Slam, works at the academy of Williams' partner and coach, Patrick Mouratoglou.

"I'm really proud of her. She's just rising in the rankings really, really well," said the champion. "We train in the same facilities. It's fun - we just kind of all get along."

The French Open has not had a home-grown men's winner since Yannick Noah's triumph in 1983, but Tsonga, who reached the semi-finals last year after beating Federer in the last eight, delighted the Paris crowd with a solid win over his fellow countryman.

"I was getting it together when it mattered, and that's all I can really ask," said Raonic. "There were some moments where I was losing a little bit of concentration on my level, and I was able to put it together when I was in the important moments."

Williams, the 2002 finalist, saw off the Swiss 17-year-old, current junior world number one and Wimbledon girls champion, more easily than many anticipated in a comfortable straight-sets victory.

"I think she has a great attitude, and it will take her a long way," said Williams. "Just doing everything better, serving, returning, just more experience helps a lot."

The American's win sets up the intriguing possibility of a meeting with Nicolas Mahut in the next round.

The Frenchman has yet to play Mikhail Kukushkin, but if he wins, a match against with Isner will evoke memories of their epic encounter at Wimbledon in 2010, when Isner won the final set 70-68 to end an incredible 11 hour, five minute encounter.

"I can be really relaxed because I just pass the first match, and now let's see what's the weather going to be like," said Berdych. "I had experience from 2010 when it was raining quite a lot and the weather was not good, and I managed to go far."

Mikhail Youzhny and Radek Stepanek will face each other in the second round after they both fought back from two sets down.

The Russian seed looked to be heading for an early exit after losing the opening two sets to the Spaniard, but reasserted himself before claiming the fifth without reply.

The first set of Stepanek's match lasted 64 minutes and was decided when his Argentine opponent took the tiebreak 10-8. The 35-year-old Czech, playing at Roland Garros for the 11th time, eventually claimed a spot in the second round for the first time since 2009.

The big-serving Pole, beaten by Andy Murray in the Wimbledon semi-final last year, will face Jarkko Nieminen in the next round after the Finn beat Poland's Michal Przysiezny in five sets.

It was all quiet on day one in terms of British players in competitive action, although Andy Murray in particular was put through his paces out on a packed Court Five.

The Wimbledon champion chose Austrian rising star Dominic Thiem to hit with and the pair produced some great tennis, prompting plenty of applause from those watching.

Murray will not play his first-round match against Andrey Golubev until Tuesday, the same day that Heather Watson plays Barbara Zahlavova Strycova.

That leaves qualifier James Ward to open for Britain on Monday when he takes on Spanish 17th seed Tommy Robredo - a five-time quarter-finalist at Roland Garros.

Stanislas Wawrinka takes in Federer's easy win over Lacko: "Enjoying the match of the Boss."

Venus Williams is a woman with a plan. "I'm in business school. I have like four classes, so I don't really do a lot of leisure stuff. I just do a lot of reading and stuff. I'm at Indiana University East. I'm officially a Red Wolf."

Milos Raonic is asked how often he tries to speak French: "As much as Google Translate can help me."

"Well, everybody loved that dress. I really had a lot of good opinions." Agnieszka Radwanska on the floral number that wowed the Chatrier crowd.

Radwanska is not the only player sporting a flowery number this year, Tomas Berdych is also on board. "They brought the idea of making the flowers for spring and summer. I think it's very popular, like through all the fashion brands. You can find everything with the flowers for the summer, so I was just really convinced in the first second and I said, 'Yes, of course.'"

He might have been given a fairly swift beating by Roger Federer, but Lukas Lacko will not be backing the Swiss for the title. "I think it's not his favourite surface and tournament as well, so I think not here."

Multi-linguist Federer, whose wife Mirka has a Slovakian background, is asked if that is among the languages he has mastered. "Not that one (laughter). For some reason, I don't understand a word when she speaks. And it's been, what, 15 years now I have been with her almost."