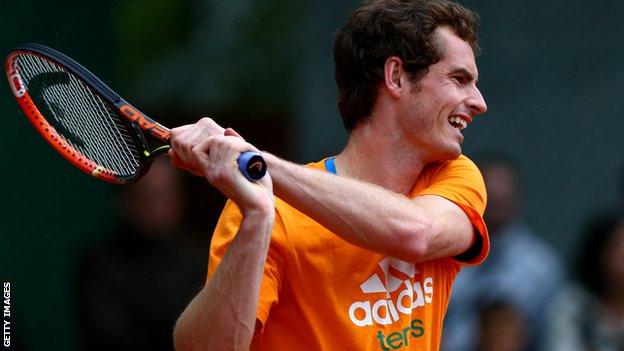 Andy Murray will hope to carry his Rome form into the French Open on Tuesday.

Murray lost to Rafael Nadal in the quarter-final of the Italian Open on 16 May.

"Rome was a good step forward," said Murray, who is seeded seventh in Paris.

"I need to build on that, take confidence from it, and I need to try to keep that consistency for the next four or five months if I can.

"I've obviously got a big focus on these next couple of weeks, and hopefully I can have a good run."

Murray, 27, remains without a coach after parting with Ivan Lendl in March, but the Scot says he is likely to name a replacement after Roland Garros.

For now, he is focused on making inroads at a tournament where he has previously been a semi-finalist.

"The target is the same," said Murray. "The target is to win Grand Slams. That's what I want to do. I will pick the person I feel is best able to help me with that."

Murray and Golubev, ranked 53rd, have met once before on the ATP Tour but it was six years ago, with the Briton winning 6-1 6-1 on hard courts in St Petersburg.

Murray has only reached the semi-finals at two of his last 17 Masters 1000 events, and we have witnessed huge fluctuations in his form this year.

There have been encouraging signs - in Miami, Rome and the Davis Cup - since his return from back surgery, but he was at a loss to explain his performances in Indian Wells - where he made a total of 99 unforced errors in his third-round match - and Madrid.

But the upturn in Murray's form in Rome, allied to his belief that he has now found the coach to guide him through the next stage of his career, provide many reasons to be cheerful.

"He beat Wawrinka in the Davis Cup this year. He's a very dangerous player, big forehand, goes for his shots. He doesn't hold back. When he's on, he's a very tough guy to beat.

"But his form has been a bit inconsistent, I think just because of his game style really. He plays exciting tennis, goes for big shots, and when he's on he makes it very difficult."

Watson, 22, came through three rounds of qualifying for the third time in her career to reach the main draw, where she will face Strycova, the world number 63.

It will be their second meeting, after the Czech won 6-3 6-3 in Tokyo in 2013, but Watson is a rejuvenated and more aggressive player after battling illness and injury over the last year.

"I think before I was a counter-puncher," said Watson, ranked 92nd. "At important moments I'd wait for my opponent to miss, or hope for them to miss.

"Now, as soon as I see a short ball, I want to win the point. I'll be making more unforced errors but I'm making a lot more winners. It's a lot more fun playing like this."