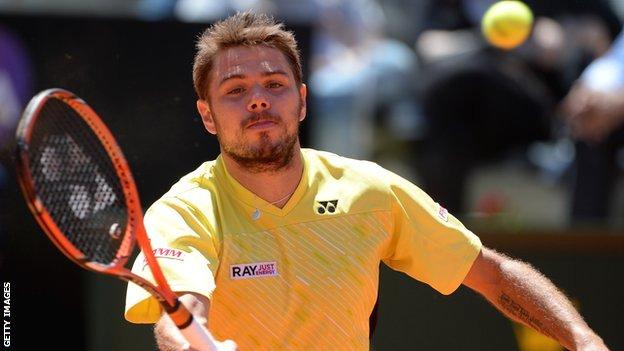 Stan Wawrinka became the first major casualty at this year's French Open with a wayward performance against Spain's Guillermo Garcia-Lopez.

Wawrinka, 29, had been trying to become the first man since Jim Courier in 1992 to win both the Australian and French Open in the same year.

Even so, Wawrinka had a 4-2 record from their previous encounters and had won his first Masters 1000 title on the clay of Monte Carlo only last month.

"I don't have all the answers for why I didn't play that good. I feel some I need to take a few days off to see exactly what's happened."

He looked anything but a reigning Grand Slam champion on Court Philippe Chatrier, however, and appeared uncomfortable from the early stages after play did not get under way until approaching 6pm local time.

An early break of serve was quickly snuffed out by Garcia-Lopez, who took the opening set in 36 minutes, and after getting back on level terms in the second, Wawrinka's challenge evaporated.

The Swiss, who was in the same quarter of the draw as Andy Murray, could barely keep the ball in court as he won just two games in the final two sets.

"I need to put the puzzle back together, but differently than in the past, because now, after winning a Grand Slam, a Masters 1000, being number three in the world, everything is different, and I still didn't find all the pieces."

Garcia-Lopez added: "I had my foot on the accelerator 80%, and when you play this kind of player they try to destabilise you, but he did not manage it because I felt very strong today.

"And I think at the end of the day what made him lose is that he was not so strong mentally, whereas I felt very comfortable."