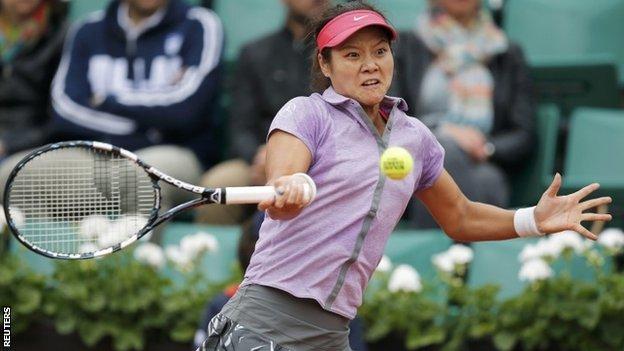 World number 103 Mladenovic, who won the juniors' title in Paris in 2009, will next play American Alison Riske.

It is the first time that both reigning Grand Slam champions have lost in the first round of the next major, after Stanislas Wawrinka's defeat on Monday.

The last Australian Open women's champion to lose in the first round at Roland Garros was American Lindsay Davenport in 2000.

Li, 32, said: "Nobody says if you're number two in the world you have to win all the matches. I mean, this is tennis, everyone comes to the court, everyone has a chance to win the match.

"It didn't matter who played against me today, I'd always lose because I don't think she had a lot of pressure from me. I think I just gave away the match."

"I was thinking at that moment at 5-0 (in the second set) that I can win 6-0 6-0 but it wasn't too good," said Halep, who faces Heather Watson in the second round. "But I stayed focused after two games lost, and then served really well."

"I don't have the words to describe what just happened," said Mladenovic. "To beat the world number two in the first round at Roland Garros, it's incredible. Without the crowd, I could not have done it."

Frenchman Llodra, who will retire at the end of the season, embraced his son ahead of a special ceremony to mark his last professional match at the French Open following defeat by Verdasco on Court One.

"It was a very tough task for me today," said Dimitrov. "I just couldn't find the rhythm. In a way it was one of those days that you can't control anything. It happens."

Krumm, the oldest woman in the draw at 43 and third oldest player in French Open singles' history, won the second set 6-0 in 22 minutes but managed to win just two games in the decider.

While there were encouraging singles wins for Andy Murray and Heather Watson, there was not such good news in the doubles.

Colin Fleming and Ross Hutchins made a swift exit with a 7-6 (8-6) 6-4 defeat by Santiago Gonzalez and Scott Lipsky on Court 11, while Ken Skupski and New Zealander Michael Venus lost to Mate Pavic and Andre Sa on Court 10.

British hopes for day three rested on Jamie Murray and John Peers up against Vasek Pospisil and Rajeev Ram on Court 14, and the Scot-Aussie combination edged a thriller 6-1 4-6 7-6 (7-2) at 20:15 local time.

Murray had almost as much trouble with the high-wire camera swooping above Court Suzanne Lenglen as he did with opponent Golubev.

The Wimbledon champion twice asked the umpire to take action after he felt it was distracting him.

"I don't have an issue with the camera being there," said Murray. "But when it moves as you're tossing the ball up or it moves between serves, that's distracting.

"I just asked if the camera could stay in one place. Then it's fine. When it's moving, moving every serve, then it gets a bit tricky.

"They have those sort of Spidercam things at a lot of the tournaments. I think they're good when you're watching matches, because you can get different angles and different views of things. But just as a player, when you're serving and it's moving around, it's a bit distracting."

American Sloane Stephens is battling the generation gap with coach Paul Annacone. "It's not about communication, it's about putting his wifi on for him four times a day. It's little things like that that make it a little tough. Other than that, he's pretty good. He's good at what he does."

Dimitrov revealed after his surprise loss to Karlovic that off-court issues might have affected him. "I must say I didn't have the best, you know, past couple of days. It was just things. But it's something you have to go through and fight through the days."

A beaten Bernard Tomic tells it like it is. "Paris is a beautiful city, but I really don't like this tournament. I've never played well."

Murray is keeping tight-lipped when asked what the craziest thing he's seen next opponent Marinko Matosevic do. "I couldn't say, to be honest in here in front of all you guys. But he's... an interesting character, that's for sure."

Venus and Serena Williams made the most of their day off with some "downtime" in Paris on Tuesday.