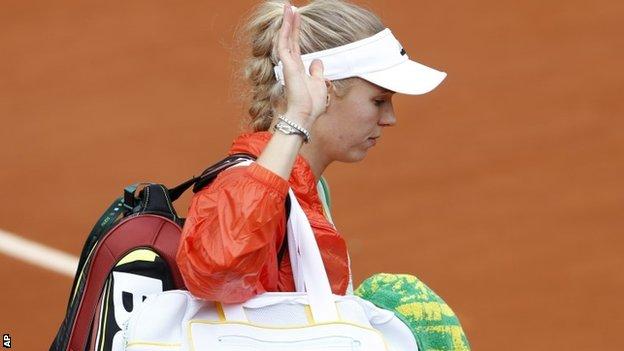 Caroline Wozniacki said she "just has to move on" after losing her first match since the end of her engagement to golfer Rory McIlroy.

The former world number one said the break-up "came as a bit of a shock".

What happens in my personal life, I just want to really keep that between my closest people around me

The 13th seed added: "I just tried to prepare the best that I could and really tried to focus on my match and what I had to do out there."

Wozniacki, a quarter-finalist in Paris in 2010, added: "I want to thank everybody for their support and sweet messages. That's really nice.

"What happens in my personal life, I just want to really keep that between my closest people around me. I just have to move on."

The Dane added that she was not at full fitness following a knee injury and was unsure of her exact plans in the weeks ahead.

"I want to prepare for Wimbledon, which is a big tournament and a better surface for me."

Her next event is the grass-court tournament at Eastbourne in June.