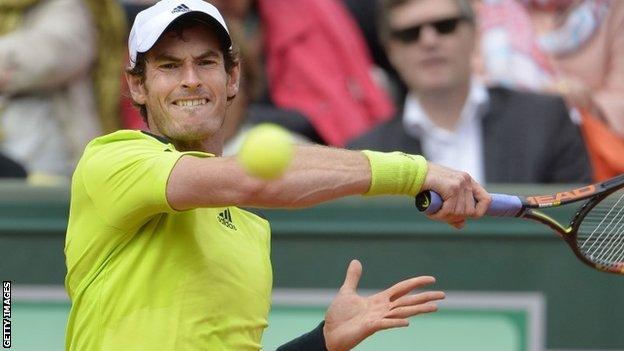 Andy Murray avoided the fate of some other leading names with a four-set win over Kazakhstan's Andrey Golubev at the French Open.

It was his first win at Roland Garros since 2012, after he missed last year because of a back injury.

Murray will face world number 66 Marinko Matosevic in the second round after the Australian beat Dustin Brown.

"That started to get dangerous, even in that fourth set, but Andy did well to finish it off in that last service game. Overall, that was a good performance from Andy. He has had lots of things going on this year - with his back, looking for a new coach - and this was his first match of the tournament, against a tough opponent who is unpredictable."

After moving into a two-set lead in little over an hour, a scrappy third set followed as the Scot's first serve deserted him, but he regained his form sufficiently to dominate the fourth.

"It was good enough to win the match," Murray told BBC Sport.

"I didn't play spectacular tennis but conditions didn't really allow that. It was very windy and very cold, heavy, and against a player who was very aggressive and quite up and down.

"There wasn't a whole lot of rhythm out there."

Golubev, 26, produced some real crowd-pleasers in making 35 winners but regularly found the frame of the racquet among 59 errors.

For the first hour or so, Murray found the high-wire camera that swoops the length of the court between games - apparently in his eye line - as testing as his opponent, but his consistency off the baseline was ultimately too much for Golubev.

He eased through the first set in 34 minutes, despite dropping serve at 4-0 and complaining to the umpire about the camera, and it was an issue once again when he was pegged back to 4-4 in the second.

"I don't have an issue with the camera being there," Murray explained afterwards. "But when it moves as you're tossing the ball up or it moves between serves, that's distracting."

Golubev could not capitalise and made three wild errors in handing the break straight back, allowing Murray to convert for a two-set lead.

A scrappy start to the third saw both men double-faulting at crucial times and four breaks in the first five games, but it was Golubev who raised his level sufficiently to get what proved to be the decisive break at 4-2.

The Lenglen crowd was finally warming up in the late-afternoon chill but Murray was not about to give them another twist on a day of drama elsewhere.

The Wimbledon champion broke for a 2-0 lead in the fourth set when he caught out his opponent at the net, and this time here was no way back for Golubev.

One stunning backhand winner showed that Murray's groundstrokes were functioning better than his serve as he closed out the match, and claimed his seventh win of the year on clay.

Asked about the surprise losses for some top names over the first three days, Murray added: "In the Slams, I have not always played my best tennis the beginning of the tournaments, but I found ways to get through.

"Regardless of what's happened to the other players, I still hoped that I would be able to find ways through my first match and negotiate my way through a tricky opponent in these conditions, so I was happy with that."