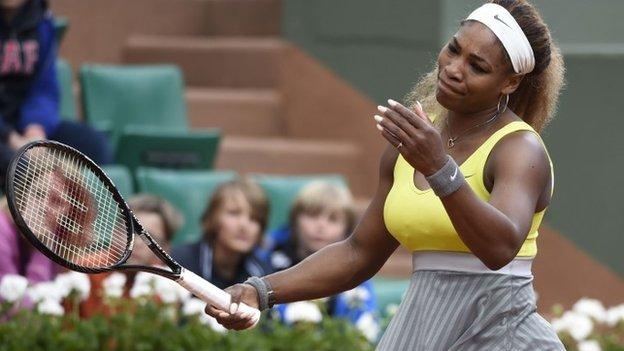 Serena lost 6-2 6-2 to Spain's Garbine Muguruza after Venus had been beaten 2-6 6-3 6-4 by Slovakian Anna Schmiedlova at Roland Garros.

It is the first time in her career that Serena has failed to reach the second week of a Grand Slam as the top seed.

It means a projected third-round clash between the Williams sisters will now feature Muguruza and Schmiedlova.

Who will win the women's title?

"The tag of favourite may be a curse, but Maria Sharapova's form on clay over the past four years means she fully deserves that title (whether she likes it or not). Of those seeded above her at Roland Garros, 22-year-old Simona Halep looks the best bet - although this year's Australian Open was the first time she had reached a Grand Slam quarter-final. If you prefer to back a former Grand Slam champion, then Ana Ivanovic and Samantha Stosur are worth keeping an eye on."

The 32-year-old American made 29 errors and just eight winners in a 64-minute defeat that means she will not add to her 17 Grand Slam titles this fortnight.

"You can't be on every day, and, gosh, I hate to be off during a Grand Slam. It happens, you know. It's not the end of the world. It is what it is.

"You know, it's great, because I'm going to go home and work five times as hard to make sure I never lose again."

She looked inexplicably underpowered as her usually mighty serve failed to win enough free points and the rest of her game disintegrated.

There was a brief moment of hope for coach Patrick Mouratoglou in the stands when his charge got a break back at 3-1 down in the second set, but a dreadful service game followed as she was broken for the fourth time to love.

The world number one looked as bemused as those watching, shaking her head and looking to the sky, while Muguruza remained impressively calm at the other end of the court.

The Venezuelan-born Barcelona resident recovered from 0-40 to move 5-1 ahead, as dark clouds gathered, before coolly serving out her first ever win over a top-five player to love.

Muguruza said: "I was thinking I have a chance. I have to play really good to win.

"There was a moment in the last games of the match, I was like, 'Oh, my God, I'm winning the set,' and then 4 1 or something like this.

"I was nervous, but I said, 'OK, be calm. She's also nervous. I have the opportunity, so I have to continue like this to win.'"

Serena said: "I just can't serve. I mean, my serve hasn't been good yet. I can't say this whole tournament, because my tournament didn't last long, but just in general."

Garbine Muguruza turned pro in 2011 and is making only her sixth Grand Slam appearance. The world number 35 reached the fourth round of this year's Australian Open, her best Grand Slam performance to date.

Asked to describe her year, she added: "My first few months I don't think have been great at all. I haven't got past the fourth round of a Grand Slam this year.

"I have a couple of words to describe it, but I think that would be really inappropriate so I'm going to leave it at that."

Venus Williams, 33, had earlier made a strong start before losing eight of nine games on her way to defeat against 19-year-old Schmiedlova on Court Philippe Chatrier.

"I felt like this was a match that I was most likely going to win," said Venus. "I don't know how Serena felt, but I'm sure she feels like that every time she goes on the court.

"So I think our expectation was to play in the next round."