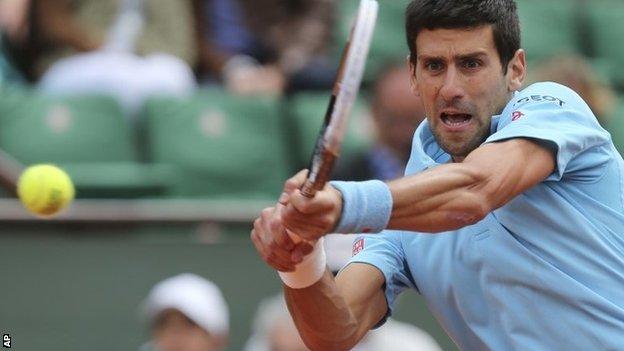 Novak Djokovic and Roger Federer cruised into the third round of the French Open with straight set wins.

Djokovic, who needs to win the French Open to complete a career Grand Slam, took just over 90 minutes to beat Jeremy Chardy 6-1 6-4 6-2.

It was Djokovic's ninth win in as many meetings against the world number 42, who has never taken a set off the Serb.

The Swiss will play Russian 31st seed Dmitry Tursunov in the next round for a place in the last 16.

Since losing in the fourth round of Wimbledon in 2011, Williams, 32, has lost in the first or second round of every Grand Slam she has taken part in, except for the 2013 Australian Open, where she reached the third round.

"I managed to make him play an extra shot," said Djokovic. "I managed to stay solid from the baseline, and I think that forced him to make a lot of unforced errors, which definitely helped me to win in straight sets."

"Last year I had not set myself any objectives," said Tsonga. "I simply tried to take the rounds as they came. I'm going to do the same this year, and I just hope it's going to work out and take me as far into the tournament."

Sharapova looked in danger of following the top seed out of the tournament at 4-2 down in the first set, but the 2012 champion fought back to take her clay-court record for 2014 to 14-1.

"I don't think anything worked for me today," said Williams, after her shock defeat. "It was just one of those days, you can't be on (your game) every day. It's not the end of the world, there's always next year."

Federer, who has not reached a Grand Slam final since winning his 17th major title at Wimbledon in 2012, said "I think it was kind of tough all the way through. "I didn't feel relaxed for the entire match. I can see why he's ranked where he is and why he probably is going to move up in the rankings."

Townsend, 18, made a major impact on her Grand Slam debut by knocking out French number one Cornet on Court Suzanne Lenglen with some huge hitting. The world number 205 only qualified by virtue of winning the USTA's wildcard challenge competition.

Andy Murray on Twitter: "How good is Taylor Townsend! #talent And she has a great smile! Gutsy win."

Who wants to coach a Wimbledon champion?

There have been enough names circulated to fill the most generous of player boxes, but the identity of Andy Murray's next coach remains a mystery.

Former Wimbledon and Australian Open champion Amelie Mauresmo was among those mentioned in despatches, and discussed on BBC 5 live on Friday.

However, BBC tennis correspondent Russell Fuller caught up with her and, employing his finest French conversational skills, was told there have been no talks with the Murray camp. Mauresmo's presence on Court Suzanne Lenglen during Murray's match on Tuesday was apparently just part of her role covering the tournament for TV.

Where this one goes next is anyone's guess.

Garbine Muguruza on making it big in Paris: "I never played on such a big court before, I never won any match in a Slam against her, so that was totally new. Before I felt very small, but today I thought, I'm not going to feel very small."

Venus Williams is asked if there is anything wrong with her sister. "Even if I had anything to say, I wouldn't say it here."

Serena Williams describes her 2014: "I haven't gotten past the fourth round of a Grand Slam this year. I have a couple words to describe it, but I think that would be really inappropriate so I'm going to leave it at that."

Novak Djokovic is asked how he copes with the effects of clay on his socks: "Luckily where I'm staying there is a washing machine, so I'm washing my socks every day."

Canada's Eugenie Bouchard confirms that she and twin sister Beatrice were named after the Duke and Duchess of York's children. "My mom is right over there. She was probably a little bit royal obsessed, so yeah."

The early departure of Serena Williams is the shock of the tournament so far, and her coach, Patrick Mouratoglou, has been discussing the defeat.

"The only thing that I can say is most of the time she's able to play her aggressive game, hit a lot of winners, but today there were not the amount of winners she usually makes," he said.

"On the other hand, Muguruza played a very good match. She was aggressive, she took the ball early and she served well. As I've always said it can happen to any player to have a bad day, and to play someone who has the best day of her career. It's the only explanation I can give today.

"There is no physical problem, she's fine. Age is not a factor. She's still in really, really good shape and very competitive." 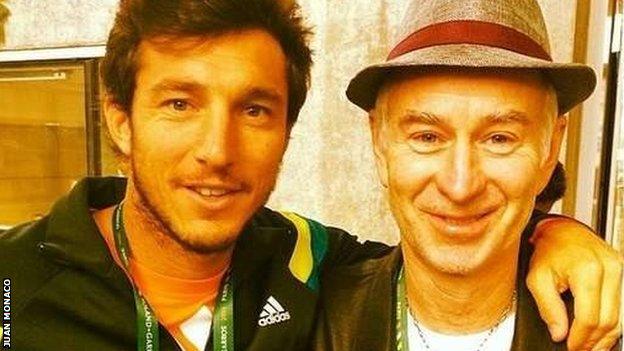